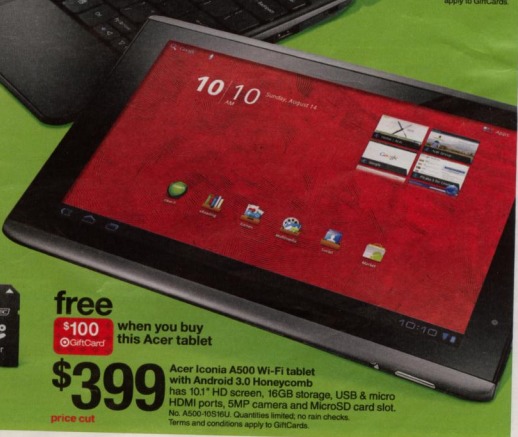 Whoa, this is a pretty surprising deal to say the least. Today we are seeing an ad from a Target thanks to fatwallet and Target is offering the Acer Iconia A500 Android Honeycomb tablet for just $399 and it comes with a free $100 gift card. So while it’s not technically $299 you save $100 because you then get to go on a little Target shopping spree with that gift card. I’d be heading to the graphic T-shirt isle right away myself.

This is one of the better deals I’ve seen for a fully featured Android 3.1 Honeycomb tablet. The A500 has all those specs you all are expecting too. Like the NVIDIA Tegra 2 dual-core 1 Ghz processor, 10.1″ display, 1GB RAM, this deal is for the 16GB version oh and don’t forget the 5 MP rear camera and 2MP front shooter. This is a great tablet and an even better price.

If you want to see the Acer Iconia A500 check out our full review. While the Acer might not be as thin or beautiful as the Galaxy Tab 10.1 it does have a nice uniqueness to it as well as plenty of ports for all your needs. Again it is $399 at Taget (while supplies last) and it comes with a free Target $100 dollar gift card making this a stellar deal at $299. I’d be running down to a Target if I was you.

Update: Deal apparently starts on 8/14 so that would be this Sunday, so you have a few days to convince the wife/husband everyone!