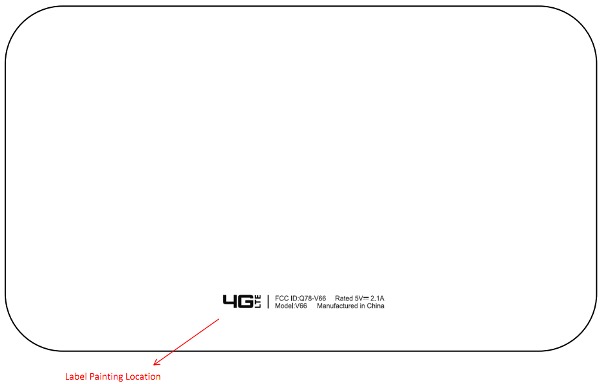 At the moment, ZTE is one in a field of Chinese hardware makers that do well enough on low and mid-range devices here in the US. Like Huawei, the company hopes to change that in the upcoming year, and it looks like their first attempt will be with Verizon. The G-men at the FCC have got their hands on said device, and it looks promising.

The V66 was previously announced with a 1.2Ghz dual-core processor and 1GB of RAM, plus a 1280 x 800 resolution screen – an absolute must for a tablet that wants to be considered high-end. Android 3.2 will provide the software end, and while an Ice Cream Sandwich update before launch is technically possible, it would be much more likely to come afterwards. You can see from the filing and the logo that it uses Verizon’s LTE network. All these specifications add up to a device that just slightly beats the T-Mobile Springboard, AKA the Huawei Mediapad. That tablet didn’t fare well at all in our review, but not because of the hardware.

Verizon doesn’t currently offer and of ZTE’s Android devices, so a branded tablet could help bump up the company’s mindshare in the US… if it is ZTE branded. There’s nothing in the FCC filing to show the ZTE logo, and carriers have a nasty habit of simply ignoring smaller manufacturers, as in the Springboard, or even larger ones, as in LG’s “T-Mobile” G2x. And of course, it’s got to sell, but then there’s room in Verizon’s lineup for a smaller tablet device. We’ll see when the V66 launches, likely in Q1 2012.