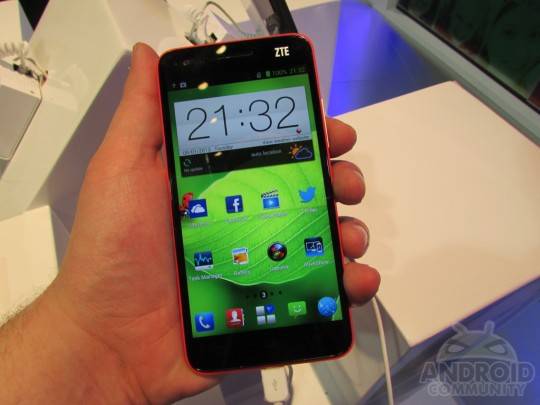 ZTE unveiled the Grand S smartphone back in January during CES. At the time they offered a complete set of specs and had the handset on display during the conference which provided for some hands-on time. Perhaps more important, the folks at ZTE had said the handset would begin rolling out during the first quarter and was expected to arrive for those in the US sometime later in the year.

There wasn’t much revealed in terms of the US release date though. The actual wording was “later this year” and on top of that, ZTE failed to offer an details or clues as to which carriers would have the Grand S in their lineups. Anyway, as we approach the mid-year mark, it now looks like the Grand S is no longer going to arrive in the US this year.

Instead, new details coming from ZTE suggest the US release has been put on hold until 2014. This of course, is likely disappointing for those who may have been waiting for the handset to arrive. But on the flip side, there may be a bit of a silver lining here. It seems that while the handset release has been pushed, ZTE will not be releasing the same exact model once 2014 arrives.

Lixin Cheng, who is the head of the ZTE’s North American division did say that they will not be releasing a year-old phone. Instead the US market will get a device that is likely to be in the Grand S family. Cheng then spoke briefly about how the “Grand S series will evolve.” Basically, it sounds like the US market could get the follow-up device, whatever that happens to be called at the time.

Otherwise, the reasons behind the delay of the Grand S launch appears to have been a result of the carriers. While ZTE has yet to say what we could expect in terms of the next device in the Grand S family, we do know the current Grand S features a 5-inch (1920 x 1080) display, quad-core 1.7GHz Snapdragon S4 Pro processor, 2GB of RAM, 2500 mAh battery, 13 megapixel rear-facing camera and Jelly Bean.