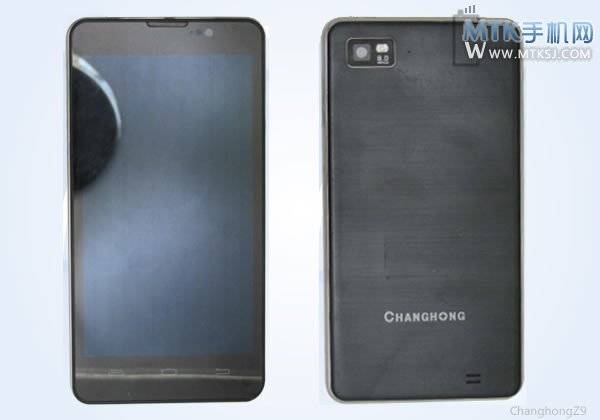 These days manufacturers of Android smartphones appear to be focusing heavily on 2 or 3 key areas. Those being massive 5-inch and bigger HD displays, quad and even 8-core processors, and of course ultra-thin smartphones. However, one spec that shouldn’t get overlooked and often does is the battery. The Motorola DROID RAZR MAXX HD has a 3,300 mAh battery, and the Note II comes in quite large too at 3,100, but how about a 5,000 mAh battery…

Folks like Huawei continue to “innovate” by having an ongoing battle with other manufacturers for the “world’s thinnest smartphone” title. Devices like the newly released Ascend P6 come in at 6.18mm thin, but as a result they drop a tiny 2,000 mAh battery in the phone that will barely get you through half a work day. It needs to stop, and a Chinese manufacturer by the name ChangHong is looking to put an end to it.

A new smartphone has been revealed by ChangHong called the Z9, and they’ve managed to pack a massive 5,000 mAh battery that should technically last for more than a few days with heavy usage. At the same time the phone doesn’t suffer by being fat. It still comes in reasonably sleek with a spec stating around 9mm thick. That’s barely, barely any fatter than the Galaxy Nexus. Who’s complaining about a millimeter or two? Not me!

The Changhong Z9 is reportedly rocking a 5.5-inch 1280 x 720p HD display, a 1.2 GHz quad-cor MediaTek processor with 1GB of RAM, and even gets Android 4.2 Jelly Bean as well. So they’ve managed to pack a huge battery into a well-rounded smartphone here. Can’t others follow? It’s a pretty average looking handset, but the battery under the hood is what matters here. Hopefully others follow suite, because this will likely never be seen out of China markets.