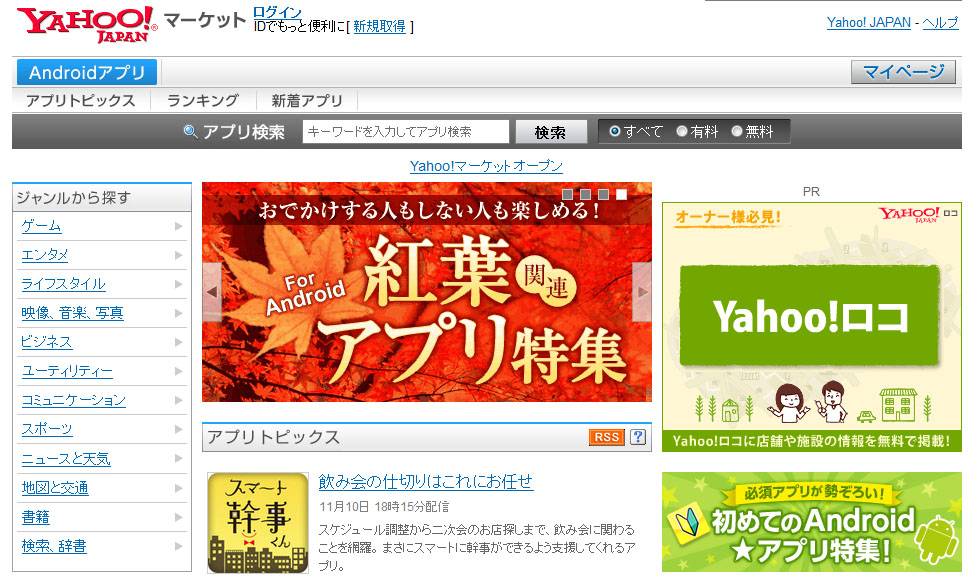 My my my, Android app stores certainly seem to be cropping up a lot lately, don’t they? The latest is Yahoo Market, a competitor for the Android Market and the Amazon Appstore that’s only available in Japan at the moment. The store features the obligatory Android app and most popular Android games. At the moment it’s just a listing of apps available in the official Android Market, but Yahoo says they they’ll be selling apps on their own in the spring of 2012.

Even with a language handicap I can spot several high-profile apps. At the moment the Yahoo Market doesn’t really do anything that can’t be found elsewhere – after all, Japanese Android users can just go to the Android Market’s web portal to see listings and reviews of all available apps. But when Yahoo begins selling the apps itself, that will put three web giants in a head-to-head battle for app sales: Google, Yahoo and Amazon.

Amazon and Google might not appreciate the renewed competition, but I’m a big fan of the alternative app store. It’s a great way for smaller manufacturers to get access to lots of apps quickly without going through Google’s official channels. And with Android gaining some massive popularity in Asia, Yahoo’s app store might be able to carve out a nice niche for itself. The official release didn’t mention any plans to expand into other markets.