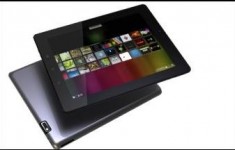 Electronics manufacturer WSL Japan will release the Xvision an5 will hit Japan’s market in April. From the press release, you’ll notice it sports a 9.7″ display with 1024×768 pixel resolution. It has a great form factor, and will only be 10mm thick. It’ll also be ready to run Android 4.0 (Ice Cream Sandwich) upon release, but then again that is soon to become the norm.

The Xvision an4 will be powered by a 1GHz Amlogic 8726-M3 processor, and carry 1GB of DDR3 RAM. All models will come with WiFi, but 3G and GPS options can be added separately. It will have 16GB of internal storage, but no sign of an included microSD card port. A 0.3 MP camera for video chat is also included, but no rear shooter.

It’s not as speedy as some of the other tablets we’ve reviewed as of late. The hardware isn’t too old, but it definitely doesn’t bring anything new to the table – so it may get lost in the crowd of many others. If priced right, it could do well here in the US, but for now expect this little tablet to reside in Japan alone.