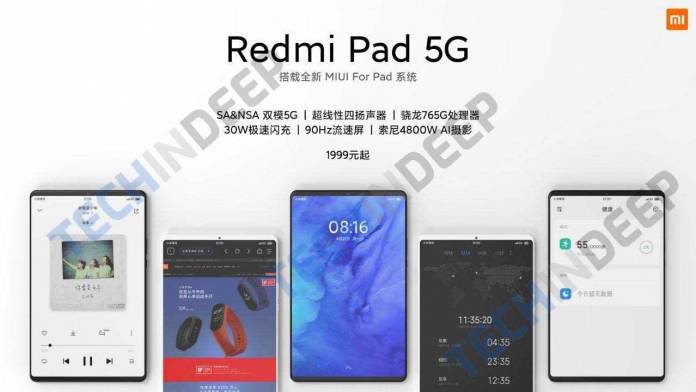 Seems Samsung is not the only one making rounds in the Android tablet market, which is in a drought to say. Buffs can expect a choice from Xiaomi. When it comes to tablets, Chinese tech manufacturer hasn’t got much to show in the last couple of years, actually since the launch of Mi Pad 4. But if you had counted Xiaomi out, think again, the company is allegedly unveiling the Redmi Pad 5G with MIUI 12 on April 27.

TechInDeep’s new tweet reveals information about an announced Xiaomi tablet, which could be called the Redmi Pad 5G. Expected to launch with 5G connectivity, the tablet could hit the market on April 27, which is when Xiaomi has announced it would unveil Mi 10 Youth and the progressive MIUI 12 in a live-streaming event.

The tweet gives us insight into the potential specifications of the tablet. The Redmi Pad 5G is slated to draw power from Snapdragon 765G processor and run MIUI for Pad – which will be a tablet optimized version of the MIUI 12. There is no information on the display size and type but it is presumed to have 90Hz refresh rate for the gaming frenzy.

Redmi Pad 5G is expected to feature four speakers, though there is no information on the battery capacity, we learn it will support 30W fast charging. Understandably then, a larger capacity battery is a possibility, which should play in the hands of binge-watchers who will relish the quad-speaker audio experience. Another highlight of the tablet could be its 48-megapixel rear mount camera with AI.

Xiaomi has not shared any official details about the tablet yet. We expect information to roll out in coming days, especially if, reports of the tablet launching on April 27 are anything to go by. Redmi Pad 5G will reportedly retail for 1,999 Yuan (approximately $282).