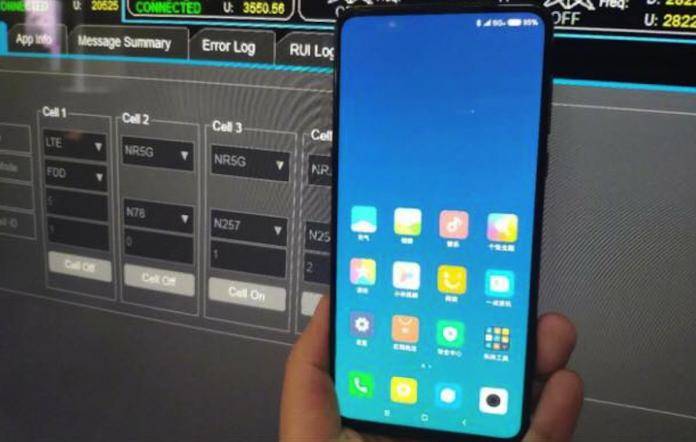 Instead of Mi Mix 3, Xiaomi rolled out the Mi Mix 2S back in March. We didn’t think the Chinese OEM would be skipping the number 3 as the next-gen Mi Mix will definitely be the Mi Mix 3. We’ve always been interested in the Mi Mix line ever since the first model was unveiled last year at CES 2017. The 2nd-gen Mi Mix smartphone was quick to be released and then a few months later, the Mi Mix 2S. In a few months from now, we hope to see the Mi Mix 3 with new features and major enhancements. One notable change could be 5G connectivity.

The Xiaomi Mi Mix 3 is already in the works. We said it may also have a pop-up camera just like the Vivo Nex. Nothing has been confirmed yet but we’ve seen a render already.

Another set of images appeared on Weibo, showing us the notch-less display. This time, we’re learning about the support for 5G. Looking closely at the upper right position of the phone display and you will see the 5G icon.

The implementation of 5G is something that must be added to the OEM’s goals for new phones due next year. Motorola has made the jump but only via a special Moto Mod 5G add-on. If the 5G becomes a standard feature, then we can take advantage of speed 10x faster than 4G.

The 5G support is being added early on but it should work soon since the technology is already established. It’s only a matter of time before they are replaced or become obsolete.

Still, this is the most notable device with 5G support was announced to date. The Moto Z3 will get 5G compatibility through a Moto Mod with a Snapdragon X50 modem, while Huawei and LG have both announced plans to release 5G phones in the first half of next year, but that’s about it so far.

We have no idea what the Xiaomi Mi Mix 3 will use to achieve 5G compatibility but it may turn to the Snapdragon X50 modem, just like the Moto Z3 and the 5G Moto Mod.