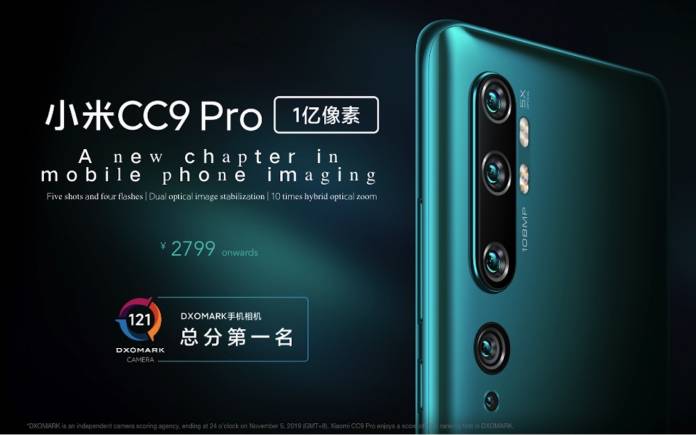 The Xiaomi Mi CC9 Pro is presenting a new chapter in mobile phone imaging. The Mi CC series was launched earlier this year with three new Android phones. The new Mi CC9 Pro appears to be the most powerful beginning with the 108MP shooter. It boasts a penta-camera setup which is actually the highlight of the mobile device. We’ve seen several teasers before today’s official launch. A bunch of them were sighted on Weibo with major details including the colors, 30W super-fast charging support, camera samples, and a demo video.

The Xiaomi Mi CC9 Pro is now official. It really boasts a 108MP so no wonder it made it on top of the rankings on DxOMark. It’s actually tied with the Huawei Mate 30 Pro with a high score of 121.

The highly-teased smartphone runs on an 2.2 GHz octa-core Qualcomm Snapdragon 730G processor. There is a large 6.47-inch Super AMOLED screen with curved edges, 19.5:9 aspect ratio, and a Full HD+ resolution. There is a waterdrop notch that houses the 32MP F/2.0 selfie shooter.

In the camera department, the Penta-camera setup includes five cameras and four LED flashes (two dual). As expected, the 108MP camera takes advantage of the Samsung ISOCELL Bright HMX sensor. It’s not the first to use such as the Mi Mix Alpha phone, also from Xiaomi, had that honor.

Xiaomi’s Mi CC9 Pro is the first to use an F/1.7 8P lens but only on the Premium Edition. There’s also a 1/1.33-inch sensor for low-light conditions. Other imaging features include a telephoto cam with OIS that can offer 5x optical zoom (up to 50x with digital). The 20MP ultrawide angle cam comes with a 117-degree field of view. The smallest shooter is only a 2-10 cm macro lens. The 12MP telephoto lens with a depth sensor is for portraits.

Xiaomi Mi CC9 Pro is powered by a 5260 mAh battery with 30W PD fast-charging (58% in half and hour/full batt in 65 mins). Choose from the Midnight Black, Glacier White, and Aurora Green as color options. Xiaomi has installed Android 9 Pie topped by MIUI 11. We’re assuming it can be upgraded to Android 10.