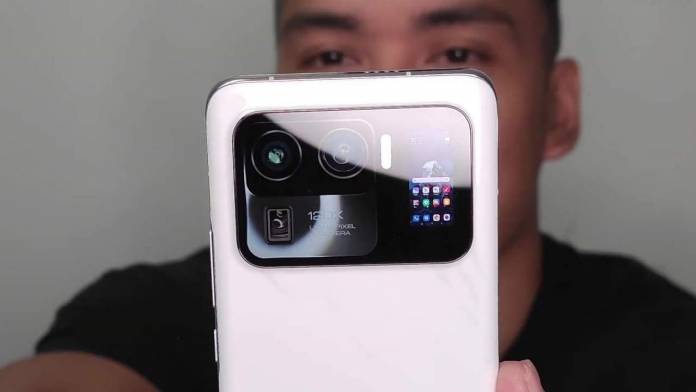 Released just a few days ago, the Xiaomi Mi 11 Ultra has a never before seen secondary display right by the camera module (currently the best rated for smartphones) that can be used to show a variety of information. The 1.1-inch AMOLED screen can display selfies or custom information like weather, music control, act as a viewfinder and do more. Days after the release, Xiaomi CEO, Lei Jun has revealed in a live broadcast, an important piece of information about this secondary display.

According to Lei, this AMOLED display on the Xiaomi flagship is the same one that’s used on the Xiaomi Mi Band 5. As speculated earlier, it means that the display wasn’t specially crafted for the Mi 11 Ultra – smart move indeed by Xiaomi.

Now another question rises – was the secondary display of the phone salvaged from the unsold Mi Band 5 units or Xiaomi got them from the manufacturer directly. Anyway, Xiaomi nailed it, and providing this niche feature wouldn’t have cost them much either. Yet, the uniqueness it brings to the fore is enthralling.

The Mi 11 Ultra powered by the Snapdragon 888 processor is one of the most camera savvy phones you can buy, and it packs a punch with other hardware specifications too. It has a 48MP Sony IMX586 ultra-wide-angle camera and a 48MP Sony IMX586 shooter with a periscope lens (also used for macro photos).

While we all now know the secret of the secondary screen lies in the fitness band released last year, there’s nothing to take away from the masterstroke Xiaomi has played. They have the hardware to back it, and only time will tell if they can beat the likes of Samsung and OnePlus in the user experience to be the undisputed champion of 2021.