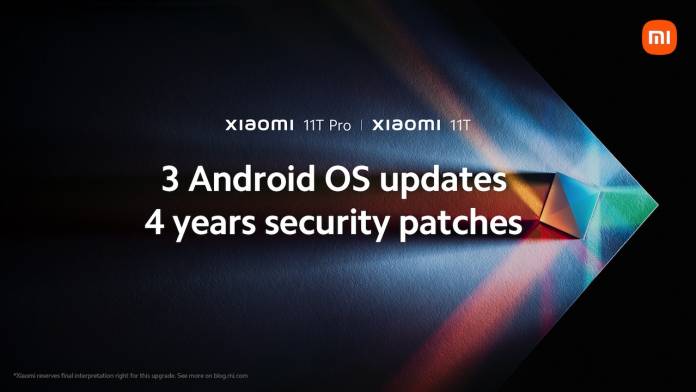 The new Xiaomi 11T series phones have yet to be out in the market but the Chinese OEM has been making related announcements. The phones are promised to received Android system upgrades. Security patches for the devices have been extended to four years instead of the usual three. The Xiaomi team is working on improving not only its products and services but also after-sales support. Three generations of Android system upgrades are already more than enough so consumers are assured of having the latest from the Android platform.

Xiaomi 11T series users can be assured their phones will always be up-to-date. With new devices being released left and right, it can be easy to be overwhelmed and think your phone will be obsolete soon. It’s not always the case with Xiaomi because it continuous to work on improvements that will extend the life of cycle of the phones, specifically, the new Xiaomi 11T and Xiaomi 11T Pro.

Phone owners don’t have to change their devices frequently. A simple software or OS update will be enough to give the phones more power and functions.

At the moment, only the Xiaomi 11T and Xiaomi 11T Pro are promised with four years of security patches and three major Android system upgrades. Plans to extend the same to other Xiaomi devices are underway.

Xiaomi aims to meet the desires of the customers. It is a challenge but the company sees it as an exciting feat. Xiaomi has always been promising amazing products to global users and part of that promise is to extend the service life cycle especially of the Xiaomi phones. The brand has its sustainability and environmental responsibility goals. With this move, Xiaomi can slowly reach that.