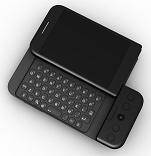 T-Mobile are within days of announcing the Android-powered G1, aka the HTC Dream, according to the Wall Street Journal.  Sources talking to the paper have confirmed that the carrier is likely to unveil the open-source device on September 23rd, having escaped the delays that other companies working with Google on Android cellphones are experiencing.

Although the carrier itself declined to comment, “people familiar with the matter” told the WSJ that the G1 would likely be in stores by the end of October.  T-Mobile have not released sales predictions, but HTC are – according to another source close to the situation – expecting to ship between 600,000 and 700,000 of the G1.

That estimate is as much as double the figure analysts have previously suggested, with project backers confident that the G1 can take sales from rivals such as the iPhone 3G and RIM’s BlackBerry range.  The WSJ does not suggest pricing, but earlier leaks indicated a $199 preorder tag for existing T-Mobile customers.