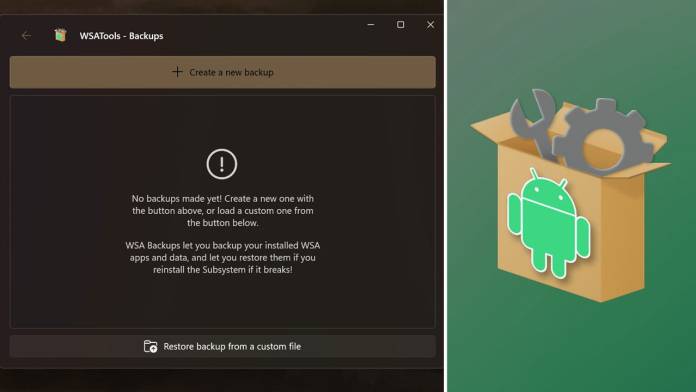 WSATools has brought a unique functionality to the Windows 11 ecosystem of sideloading the Android apps of your choice without much hassle. The application developed specifically for Windows 11 has gone through the elemental evolution phase and is now moving toward a more fine-tuning regime for the users to explore more. The APK installer developed by Simone Franco landed officially on the Microsoft Store in the first week of last month, and now WSATools is adding another cool feature for Android users to rejoice.

The fan-developed app will now let you backup the installed apps on Windows 11 which eliminates another couple of steps for times when you need to restore them. Since WSATools 0.2.0 version works with the Windows Subsystem for Android – and in case it crashes or needs to be reinstalled – the Android apps won’t be gone.

The user data associated with the apps will also be backed up, so, when the apps are restored, they’ll be as good as the last time you left them. This is important when you’ve used the Android apps on Windows 11 for a long time and can’t afford to lose the data. Just for the record, the entire virtual drive (in a VHDX file) is backed up right where the Windows Subsystem for Android is stored.

Simone Franco shared the real-time screenshot of the new feature in action on his Twitter feed, saying that he has been working on it for quite some time. He hasn’t detailed the release date of the new backup feature on WSATools version 0.2.0, but we’re hoping it will happen in the coming week(s).

Already the developer has added useful features like installing and initiating the debug bridge on the Windows Subsystem for Android. It has to be kept in mind, the tool can be found in the Microsoft Store and Android apps can be installed if you’re enrolled with the Windows Insider program.