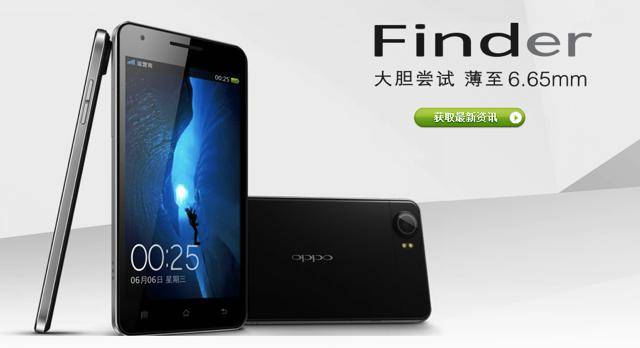 Another month, another world’s thinnest smartphone. The latest contender for the somewhat wobbly throne is the 6.65mm Oppo Finder, last seen in a preview image about a month ago. The phone is currently set for preorder on June 6th, but unfortunately it’s only in China, where Oppo operates. Getting a Finder into the hands of the fashion-conscious outside of Asia will require a crafty importer.

The phone’s specs are surprisingly high given the gimmick. With a 1.5Ghz dual-core processor, 4.3-inch AMOLED screen, 16GB of storage and an 8-megapixel camera, it’s roughly the equal of the HTC One S (which is no slouch in the style department itself). It’s hard to deny that the phone looks a lot like an iPhone 4 that’s been run over by a steamroller – in a nice way. Maybe all those Apple rumor sites can use these press photos for fodder later this summer!

Oppo claims that the software is Android 4.0, though like in-country competitor Huawei, they’ve got a custom interface running on top of it. Oh joy. The phone is almost certainly an unlocked GSM device, as it will be sold independently for 3,999 Yuan (just over $630). Those of you who are already smitten can keep a spark of hope alive: Oppo has a partnership with a tiny California manufacturer, so maybe an American release isn’t impossible.