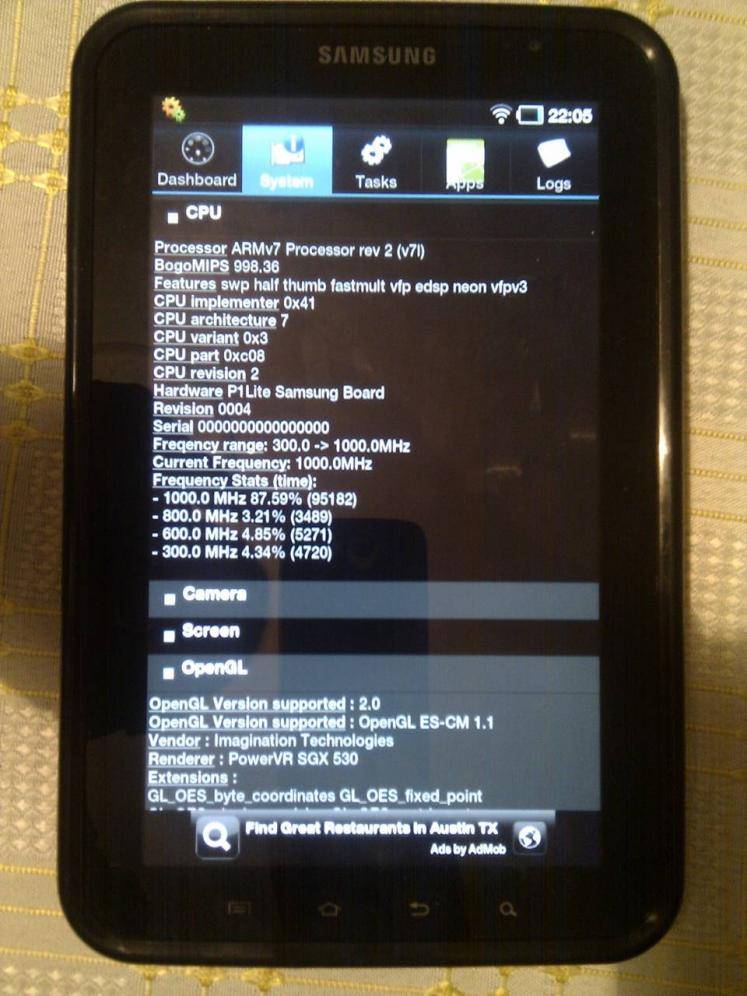 This looks like nothing but bad news, according to some pretty unhappy users over at the XDA forums it looks like the WiFi-Only Samsung Galaxy Tab (original 7″ model) has been downgraded on more than just a few things. It is much less than just a Galaxy Tab with no 3G radio inside. This has nothing to do with the upcoming 8.9″ or 10″ but it is disturbing news either way. Users are reporting it to have different hardware inside all together, with Samsung never mentioning this that is not cool. Weaker GPU that performs much worse in gaming, video playback taking a huge hit with that as well, even lack of HDMI features and more.

If you look at that 3rd line from the bottom in the picture above you will see PowerVR SGX530 listed as the graphics processor. The original Galaxy Tab and all Galaxy S phones came with the Samsung Hummingbird CPU that had a PowerVR SGX540 GPU. Why does this matter, the SGX530 is much, much weaker. You will have slower, and worse gaming performance as well as video playback suffering. YouTube content in HD struggles, but was smooth before. This is all because the weaker GPU. All Galaxy S phones have a lower resolution with a better CPU/GPU so video playback and games rock, but the Galaxy Tab resolution is 1024×600, much larger with a weaker GPU. Some users reported anything in YouTube above 480p struggled.

From what I’m reading at XDA, the extremely powerful and popular Hummingbird platform from Samsung was replaced with the OMAP 3630 Platform with the much slower SGX530 GPU, but the processor speed was bumped up to 1.2 Ghz from 1.0 Ghz so the device feels pretty fast and snappy, but deep down it has been degraded. Samsung also removed GPS, Bluetooth 3.0 has been downgraded to Bluetooth 2.1, it doesn’t support HDMI video output anymore either and it runs Android 2.2.

One user bought it along with the HDMI dock only to plug it in and get a error saying it doesn’t support HDMI Output. This is all pretty bad news, not only that but as far as I know Samsung did not mention ANY of this back when they announced the Wifi-Only going on sale. We will report more on this as we hear it, or if Samsung comes out to say anything regarding this issue. Looks like a little bait and switch to me.