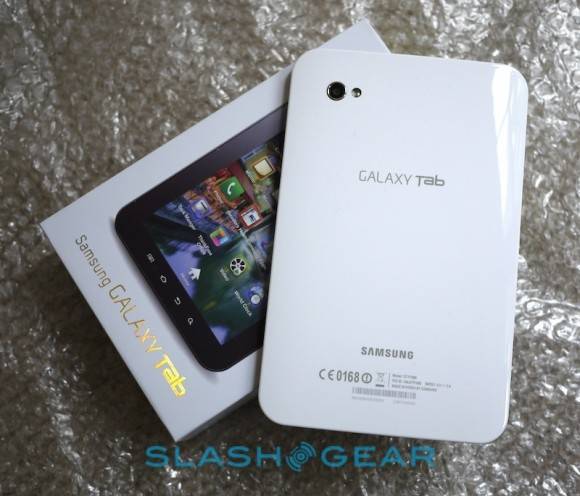 What do we have here, it looks as if Samsung has finally decided to sell the Wifi only version of the Samsung Galaxy Tab. Yea that 7″ slate that was released a long time ago that we never got a wifi version of, yup that is the one. A little late IMO, but better than never I guess. Samsung has just officially announced it will be up for sale starting April 10th (in 4 days) at multiple outlets and online sites.

According to Samsung, it will be available starting April 10th at stores like Circuit City, Tiger Direct, and CompUSA. As well as others like Fry’s, with Best Buy and others likely to follow. It is the same 7″ Android 2.2 powered slate we all should know already, with that bright and crisp display. The low price of $349 will get you the 32GB Wifi-Only model.

This is a little late, but it is most likely to clear stock to get ready for the new Android 3.0 Honeycomb tabs they have coming next. It will be interesting to see if any of the Wifi models have 3G inside and they sell them to get rid of stock, but that is pushing it. If they do have cell radios inside, I bet those guys at XDA will get them working. In case you’ve forgot about this device check out our very own sister site SlashGear’s hands-on review . For those that have always wanted this, will you buy it, or the Wifi only Xoom? Or will you wait for Samsungs new Tabs? Tell us below.

DALLAS, April 6, 2011–Samsung Telecommunications America (Samsung Mobile), the No. 1 mobile phone provider in the U.S.1, announced today that several retail stores and Web sites will carry the WiFi-only Samsung Galaxy Tab™ by April 10, offering customers the opportunity to buy this powerful and compact mobile tablet for $349.99. Consumers can visit http://www.samsung.com/us/mobile/galaxy-tab for a complete list of retail outlets selling the WiFi Galaxy Tab.
The Galaxy Tab is powered by the Android™ 2.2 platform and has a 7-inch TFT display with a 1024 x 600 resolution. The super-light and sleek device weighs just 13 ounces, is 12 millimeters thin and easily fits in a pocket or purse. The Galaxy Tab includes 32 GB of internal storage and offers microSD expansion to allow for up to 32 GB of additional storage.

“We are excited to have the WiFi version of the Galaxy Tab join our growing portfolio of Galaxy-branded devices,” said Dale Sohn, President of Samsung Mobile. “The 7-inch Galaxy Tab is the first truly mobile tablet on the market, allowing users to comfortably hold the device in one hand while typing or navigating the Web with the other.”

The Galaxy Tab supports Adobe® Flash® Player 10.1 to deliver an enhanced content experience and allow users to engage with thousands of sites with rich Adobe Flash Player compatible applications and content including games, animations, rich Internet applications (RIAs), data presentations and visualizations, ecommerce, video, music and more. Plus, the device is designed with a rear-facing 3 megapixel camera for taking pictures on-the-go, and a front-facing 1.3 megapixel camera and camcorder for video chat.

Services like Google Maps™ Navigation and Google Goggles are available on Google’s Android platform. With useful location-based services like Google Maps™, consumers can search in Standard English instead of entering an exact address. A search-by-voice function is just as intuitive, meaning searches can also be completed easily on the go. Google Goggles™ is a powerful, visual search tool that uses the Samsung GALAXY Tab’s camera to uncover information – an image of a landmark or artwork is automatically used to perform a search, delivering relevant content like a description or history. In addition, with a camera, users can enjoy various augmented reality services which are downloadable in the application market. Plus, Galaxy Tab users have full access to more than 150,000 applications available for download from the Android Market™.

The Galaxy Tab keep users organized and connected with Samsung’s Social Hub application. Social Hub works with the user’s Messaging and Contacts to initiate the sending and receiving of information, whether it is e-mail, instant messaging, social network updates or SMS messages. Additionally, calendar information from portal calendars, such as Google Calendar, and social networking services are displayed together in one calendar with two-way synchronization.

Android is a trademark of Google, Inc.