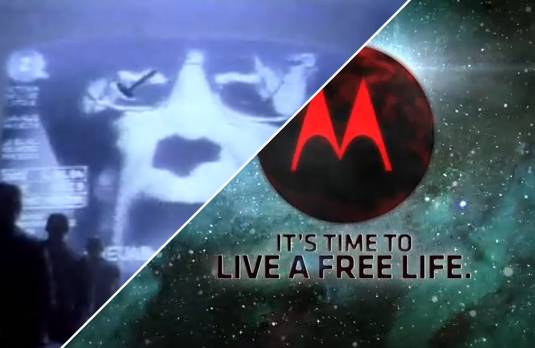 Unless you miraculously found a way to live under a rock on the moon for the past 25 years, you’ve had a pretty good chance of seeing the Apple Macintosh 1984 commercial [below], the one directed by Ridley Scott, the one with the woman running through hallways of automatons ultimately to toss a hammer through a screen, smashing an image of Big Brother. This commercial was made to announce the release of the Macintosh personal computer. Today we’ve been treated to an ad spot made by Motorola to promote their upcoming tablet computer XOOM, featuring the new Google Android mobile operating system Android 3.0 Honeycomb, made specifically for tablets – this commercial directly targets the 1984 commercial for Apple Macintosh. Yesterday a massive article by creative director Steve Hayden detailed his work on and knowledge of the 1984 commercial, celebrating its excellence.

There are a bunch of fun facts inside the article by Hayden, and I have no qualms with saying that I too think it’s the best TV commercial ever. In Hayden’s notes he writes that the brief for the commercial was simply a message from Jobs: “I want to stop the world in its tracks.” The commercial was originally a 60 second ad that ran during 1984 Superbowl, then running in 10 US markets as well as Boca Raton, Fla., headquarters for IBM’s PC division. This 30 second spot was also run in movie theaters across the US via ScreenVision advertising, one theater owner running the ad for a month after the buy was over because he loved it so much.

Copywriter Gary Gussick penned the line “Why 1984 won’t be like 1984,” Ridley Scott was brought on board to direct, Hayden and his brother wrote a speech for Big Brother using every dictator from Mussolini to Mao, and the ad spot told the world that owning and using a personal computer meant you were free of the oppression that held you. This was against more than just an operating system, it was against the then-modern fear of technology, the looming “Communist threat,” and the status quo in so very many ways.

What does Motorola do here in 2011? They make an ad spot with the globe floating in space with a couple of earbuds in, visually identifying it as what some people call a “Podling,” essentially someone who has their iPod plugged into their ears 24 hours a day. This commercial blasts

ONE WAY TO WORK

Meanwhile the commercial has slowly faded to black and white, now BLASTING into color, jamming into your face

Will Apple fear this ad? Not as much as they’ll be scraping their fingernails into their kneecaps over it. Surely this is a spit in their face, and also a spit in the faces of the original commercial, but then again it’s also a compliment that they’d target Apple only in such a direct way.