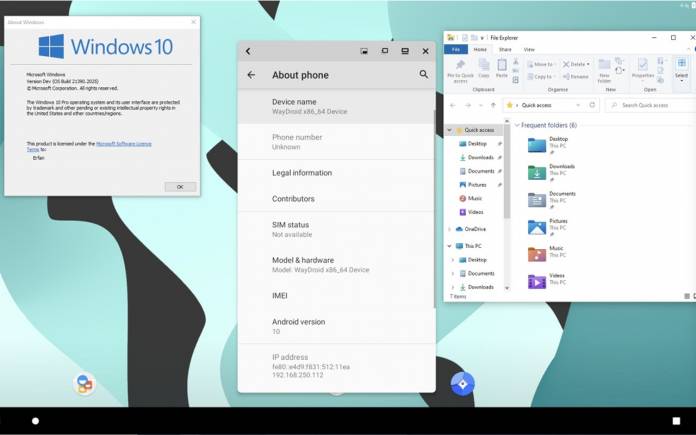 If you have been following developments related to Windows 11, you’d be familiar that Microsoft is working on bringing support for Android apps to Windows 11. The new operating system from Microsoft is scheduled to release starting October 5. We learned earlier this month that the Android apps will not be available on the OS at release – it’s not ready for general usage, Microsoft notes – but will be introduced at a later date, which could be earliest by mid-2022.

When the Android apps are made available for Windows computers and tablets, users will either be able to use them either by downloading them from Amazon Appstore or sideloading them. Before that can happen, Waydroid, an open-source tool that runs Android on Linux devices has, according to Waydroid developer Erfan Abdi, being made available to run Android on Windows 10.

Yes, you read that correct! Waydroid is being configured to run Android on Windows 10 using Microsoft’s Windows Subsystem for Linux (WSL). Reportedly, Windows users cannot download Waydroid for WSL just yet. Also when it is available, it may not be really supportive of hardware-accelerated graphics thus limiting you occasionally.

However, Waydroid will support Windows 10 well before Android apps are made available for Windows 11 the native way by Microsoft. Running Android on Windows has been something desktop and dedicated Windows users would definitely rejoice.

The users will be able to use and install mobile-specific games and apps, and may also be able to function with more ease when their android phone is not handy. We are personally waiting for Microsoft to launch the native experience, but maybe before that happens, Waydroid deserves to be tinkered with!