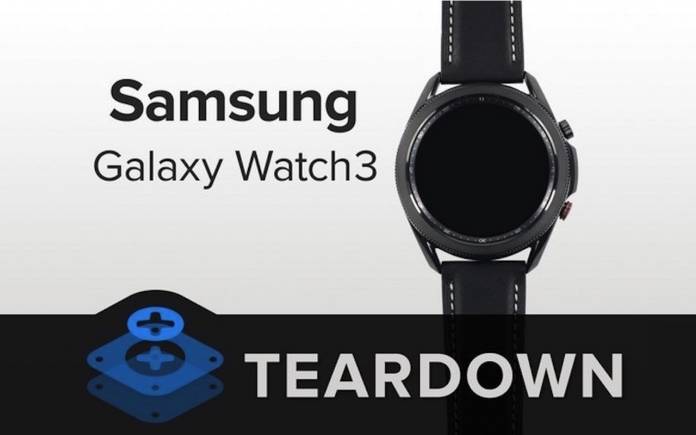 Teardown videos are important because they show us whatever is inside a gadget. The innards are analyzed so we have an idea of how well-designed a device is or how easily repairable it is. The last teardown video we featured last week was for the Samsung Buds Live. Basically, the teardown revealed the Beans nickname plus several tiny mics inside. This time, we’ll get to see what’s inside the newly announced Galaxy Watch 3. The wearable device from Samsung has announced during the Galaxy Unpacked earlier this month together with the Galaxy Note 20, Galaxy Tab S7, Galaxy Buds Live, and the Galaxy Z Fold 2.

The Galaxy Watch 3 was finally announced after months of rumors and speculations. It already received FDA approval for ECG and blood pressure tracking in the US. It was leaked several times including a hands-on video so we had an idea about its design and features.

The iFixit team managed to get a hold of the Galaxy Watch 3. You know what that means: teardown treatment. The watch is available in two sizes: 45mm and 41mm. It’s thinner, smaller, and lighter. It comes with a 1.4-inch circular display, 360 × 360 resolution, and a physical rotating bezel as previously rumored. The device runs on a 1.15 GHz Cortex-A53 Exynos 9110 Dual-core, 1GB RAM, and 8GB onboard storage. There’s wireless charging plus an optical heart rate sensor, barometer, accelerometer, gyroscope, and an ECG sensor. The IP68 protection offers water resistance up to 50 meters.

Opening the smartwatch is easy. The tiny tri-point screws and rubber gasket make it easy to open. Removing the back cover must be done carefully but don’t worry, no traps will be tripped. The back case contains the wireless charging coil, heart rate sensors, an ECG sensor.

So how repairable is it? IFixit gives it a decent score of 7. You can’t change the rear sensor array that is fixed to the back cover but the rest are modular. Opening the gadget is straightforward and glueless. You can easily access the display and battery. The design of cables doesn’t result in overlapping. There are no fragile ZIF connectors either.