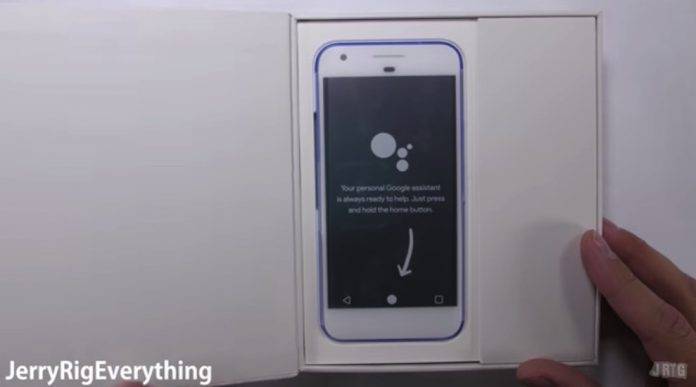 Moving on from the new LG V20 Zac Nelson subjected to a durability test last week, here is the new Google Pixel smartphone being featured in two videos. The first one is another series of Scratch, Burn, and Bend tests by Nelson while the other one is a Drop test by TechRax. Both videos are published on Youtube.

We’ve heard some initial reviews, impressions, and quick analysis of the new Google Pixel phone but JerryRigEverything’s Durability Tests are something to look forward to. Most of them can be painful to watch but they are generally useful for the consumers about to make an important decision.

In the first video below, the Google Pixel is noted as a device resulting from the combination of some of the best features of other smartphones like the fingerprint scanner of the LG V20, back glass panel of the Galaxy S7, and angled edges of the HTC 10.

As with any scratch test, the Google Pixel scratches at level 6 on the Mohs Scale of Hardness using a special pick. This is again normal for most premium smartphones. The 8MP camera is covered by the glass display so it doesn’t scratch.

You will see no button at the bottom so there’s nothing to check. What’s interesting though is the earpiece which is actually just cloth. This is obviously less durable compared to plastic or metal speaker grill found on other mobile devices.

At the back panel, we see a glass back panel that seems to be softer so it is easier to scratch. There’s no primer or plastic layer on the blue aluminum cover–it really is aluminum and yes, really blue. It can scratch easily with keys but you can rub them off completely. Zac actually said the new Google Pixel can hold up better than the iPhone 7.

The fingerprint scanner is found at the back. It’s not protruding so there won’t be deep accidental scratches. It’s scratched by the tester but still works.

It took eleven seconds before a part of the screen turned white. It’s not black but white and it’s actually permanent unlike the LG V20 that completely disappeared.

The Google Pixel is said to be one of the most durable phones this year. It’s impressive because pressing from the back of the phone, there’s no screen bulging out. Bending from the screen, there is zero flex.

A series of Drop Tests was done by YouTuber TechRax by performing a 5-foot drop on the side and face. Unfortunately, the test didn’t last very long because a small crack appeared on the glass screen when dropped on the side. And finally when dropped face front, the screen was badly damaged. That shows the phone isn’t too ready for accidental drops especially from five feet.

If you plan on getting one, just watch out for the scratches at the back panel and that cloth earpiece. We’re guessing cloth was used to improve call quality but we have yet to test that one out so we’ll see. And oh, avoid dropping the phone from a height of five feet face front because you know what will happen.