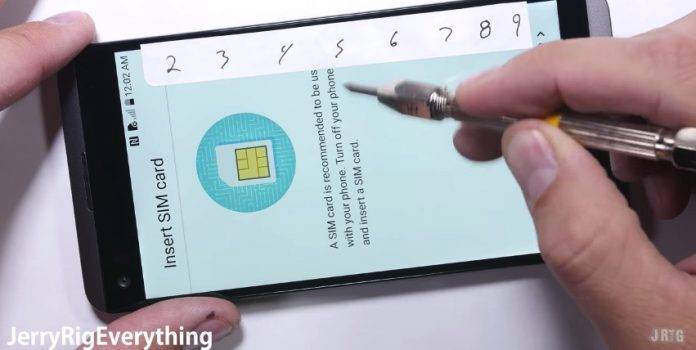 After doing another scratch test on the Galaxy Note 7, Zac Nelson of JerryRigEverything has done a Durability Test on the new LG V20. He’s also doing one on the iPhone 7 Plus and the new Google Pixel but we’ll have to wait for a few more days for the results to be published.

The LG V20 is the latest premium flagship phone from the other South Korean tech giant. It’s the older sibling of the V10 which passed the test last year with flying colors. Zac said it’s one of the most durable phones of 2015 so we’re interested to know if the new V phone lives up to the same expectation and legacy.

Notable in the LG V20 is the removable battery. Flagship devices have started to shy away from replaceable batteries but LG decided to make it removable.

The back panel of the phone has an eject button so opening it is easy. The battery also slides in without any problem.

On the front panel, LG installed a screen protector which can still be removed. Zac has removed it before the scratch test for obvious reasons.

As usual, mineral picks on the Mohs scale of hardness were used. The glass screen then scratched at 6 and deeper at 7. That’s normal which means coins or keys will not scratch your phone screen.

LG used pure plastic material on the bottom and top of the front panel. Buttons and the speaker grill are made of metal, giving that special premium feel. Compared to plastic buttons, this LG V20’s buttons won’t easily fall with wear and tear according to Zac.

The LG V20’s back panel is made of solid metal. You would still need a protective case to keep it from scratching—to be sure. The fingerprint scanner can be scratched but still functions. The back metal panel can be scratched by keys so a case is still recommended. There’s also the camera lens that’s protected but it’s not pure sapphire so it may still scratch and shatter if there’s a small abrasion.

Similar to the V10, the LG V20 lasted six seconds before a part of the screen turned black. It recovered though after a while and is soon cool to touch.

The LG V20 is said to flex more than the V10 did before. From the back and the front, it doesn’t break. The back panel and battery pop up a bit but phone still functions. It doesn’t snap so we can say the phone is safe to sit on—accidentally.

So far, so good. The LG V20 is more durable than the LG V10. The stainless steel rails make the device strong enough for rough use. It’s highly recommended that you use a protective case to keep it in tip top condition.