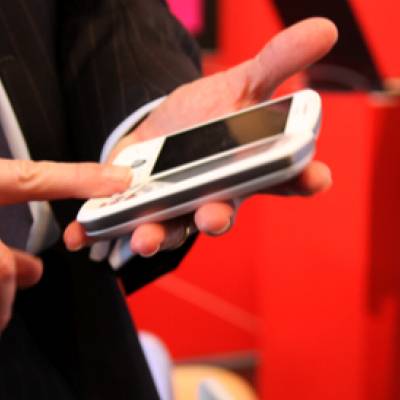 It’s been all quiet on the Android front here at Mobile World Congress, and for a while we worried we might end up leaving the show without seeing anything other than reference platforms and non-functional dummy phones.  All that has changed with the news that Vodafone have clinched a deal to launch the second Android handset, in the shape of the HTC G2, which will go on sale in Europe as the Vodafone HTC Magic.

Full details on the handset won’t be available until after a press conference later on today- which you know Android Community will be attending – but Vodafone CEO Vittorio Colao did confirm that the HTC Magic would be an exclusive to the carrier in Europe “for a limited period”.  Availability beyond that point is unclear, though it’s likely that just as the HTC Dream (aka T-Mobile G1) has gone on sale under HTC’s brand elsewhere in the world, so will the Magic.

Although there are no official shots of the HTC Magic yet, Pocket-lint managed to snap a few pictures of the handset prior to the official announcement.  It certainly bears a strong resemblance to the non-QWERTY G2 that we saw leaked images of back in January.