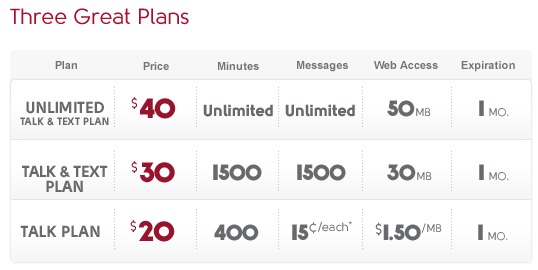 Virgin Mobile has just outed a new no contract pre-paid plan options for those folks who don’t need a top-tier smartphone but still love to talk and text. Announcing the new Virgin Mobile pre-paid PayLo plan offers unlimited talk and text, with 50 MB of data (web access) for $40 monthly. While the deal sounds decent this is more for feature phones that have web access, not a smartphone running Android.

For the average feature phone user that requires the very seldom use of web access this is potentially a good deal. While 50 MB isn’t a lot of data, Virgin Mobile’s feature phones don’t have big screens and shouldn’t use up too much of that data. Virgin offers some impressive Android devices like the Motorola Triumph but that doesn’t fit the bill for this new plan.

The new unlimited PayLo plan is their third option for feature phone users and the unlimited usage applies to calls, texts, picture messages, emails, and even instant messaging apps. If you are one to talk for hours and hours or have some text crazy kids this is a pretty good no contract option for those in need. Head to Virginmobile.com for more details.