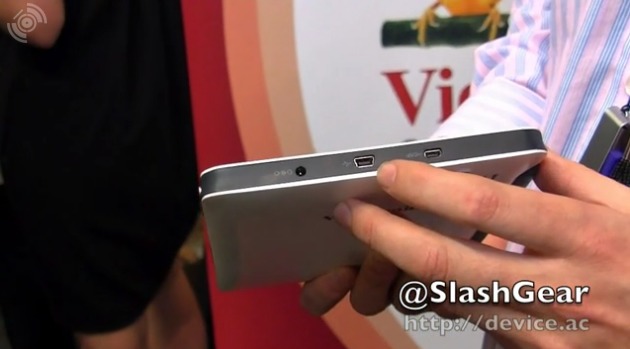 The low priced Viewpad 7e Android 2.3 Gingerbread tablet was just made official today by Viewsonic. We’ve seen this tablet plenty over the past few weeks as well as enjoyed some hands-on time with it back at IFA this year. Today Viewsonic has announced that it will officially hit the shelves this month so you should be able to snag one up any day now for just $199, more details below.

We saw plenty of this tablet at IFA this year and for all the details you can click here. The Viewpad 7e may not be the thinnest or best tablet around, but for $199 it comes in with some pretty decent specs and hardware — but its no Kindle Fire. We have Android 2.3 Gingerbread (no Honeycomb) with Viewsonic’s new 3D user interface called Viewscene 3D. Hardware wise we have a 7″ 1024 x 600 resolution display, 1 GHz single-core processor to chug things along and only 512MB of RAM and 4GB internal storage. Here is our hands-on video below:

While it may not be top of the line we do get a 3MP camera on rear and VGA front all included for the low price of just $199. Pair that with mini-USB, micro HDMI-out and a micro-SD slot you have most of the things you’d want or expect in a low priced budget tablet. It does come pre-loaded with the popular Swype keyboard and the viewscene 3D user interface is quite snappy and I’ve heard good things on that front. For full press release details see this page, then head over to Amazon and pre-order the Viewpad 7e today.