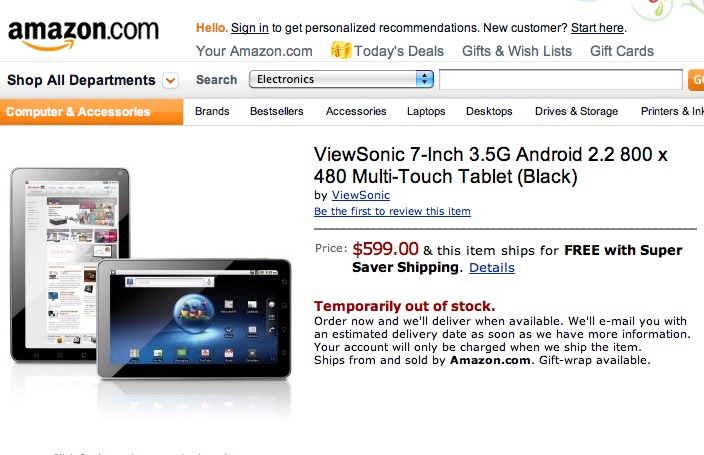 ViewSonic’s been birdfeeding the computer industry with lovely monitors for so long now, it was just a matter of time before the pulled out all the plugs and wires and whatnot from behind the screens and offered a fabulous little tablet. It’s seven inches of front and rear facing camera having, 600MHz ARM CPU toting goodness, and it’s only $120 more than they promised to give it to the world for two weeks ago. Amazon is where you can pre-order it, $599 is what you’re gonna be paying. And it can make calls!

This price point puts it right up there with the Samsung Galaxy Tab, a competitor I’m sure most groups would feel it right to attempt to avoid. Of course, we know that a close competitor of this tablet is more than likely going to be the Samsung Galaxy Tab, and we know that it can also make calls, (as seen here,) but hey, that’s a hack, and this one’s good to go right out of the box. This ViewPad 7 has 512MB of onboard storage, a microSDHC memory card slot, GPS, Wifi, Bluetooth, and 800×480 resolution.