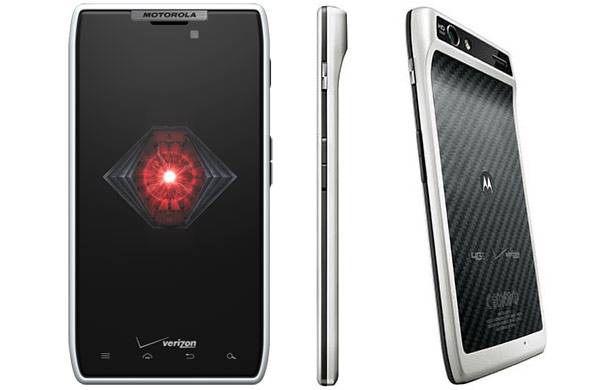 If you’ve been holding on to your three hundred bones, waiting on the prospect of chillier version of the Motorola DROID RAZR to land in time for Christmas, you needn’t wait much longer. Verizon announced availability for the white variant via press release, just one day shy of its December 15th debut. Speed freaks and fashionistas can pick one up tomorrow at the regular $299 on-contract price.

There’s also the deal for a select group of consumers who want both a Verizon 4G LTE smartphone and tablet: buy a new DROID RAZR and you can take an extra hundred dollars off the price of a DROID XYBOARD tablet. Since the cheapest 8.2-inch XYBOARD is $429.99, that makes for an attractive offer – but only if you really want two multi-year contracts. Here’s our hands-on look at the XYBOARD 8.2 and 10.1 – our reviews of both units will be coming in a few days.

Of course, the white RAZR isn’t exactly the most anticipated Verizon phone at the moment. The press release announcing availability for the Motorola phone seems to be all the company is saying this morning – still no official news on the Galaxy Nexus release. The latest rumored date, corroborated by retailers around the country like Costco, is also December 15th. At this point it looks like Verizon may be planning a “soft launch” – no significant promotional effort or advertising, just a sudden availability. Of course, since there still isn’t any ironclad official word on availability, they may have bumpbed the internal date back. Again.

The fat lady has not sung yet. Tomorrow we’ll find out just how much longer the intermission will take.