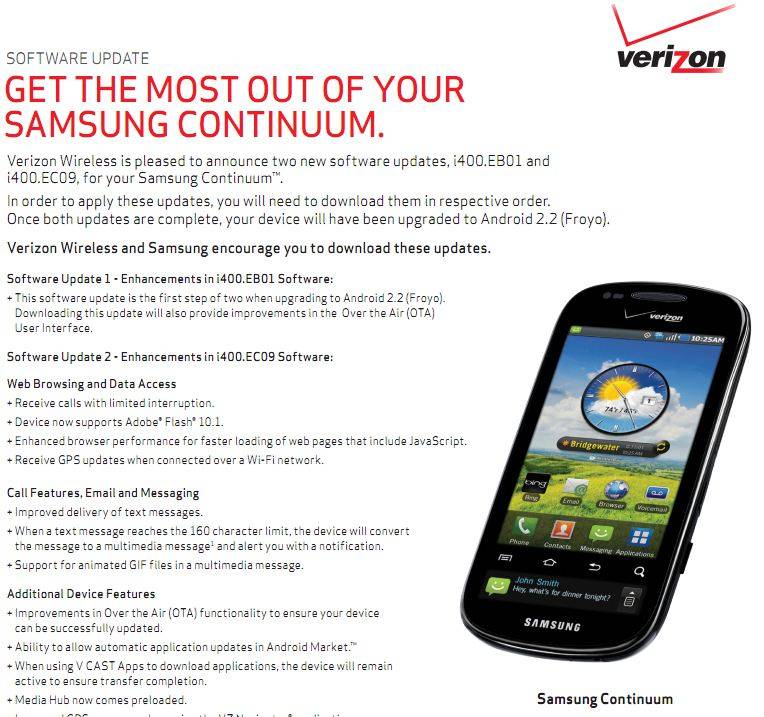 Here’s something we weren’t expecting to see. Ever. Verizon has started rolling out an update to the Samsung Continuum, the OG Galaxy S variant with a small secondary screen below the navigation area. Curb your enthusiasm: it’s not Ice Cream Sandwich. It’s not even Gingerbread. It’s Android 2.2 Froyo, a version of Android that is now a full one year and nine months out of date. Continuum owners, if there are any of you left, please try to contain your boundless joy.

The Samsung Continuum was released on November 11th, 2010, and hadn’t received a major update until now. That’s 463 days of “support” running an operating system that was out of date when the phone launched. We’re not ones to pass around the “F” word lightly, but this sort of thing is what gives Android its fragmented reputation. Heck, six weeks after the Continuum showed up on store shelves, the Nexus S and Gingerbread appeared as well.

The Continuum uses a unique “ticker” design, with a 480×96 screen beneath the main 3.4-inch screen. The form factor didn’t catch on, despite Samsung supporting it with a handful of custom-made apps and an SDK. For other phones with wacky form factors that didn’t catch on, check out the Kyocera Echo and the LG DoublePlay. To update your Continuum, just go to Settings, About Phone, System Updates, Check New. There’s two different packages that you’ll need to download and allow your phone to flash.

Check out this hands-on video, for old time’s sake: