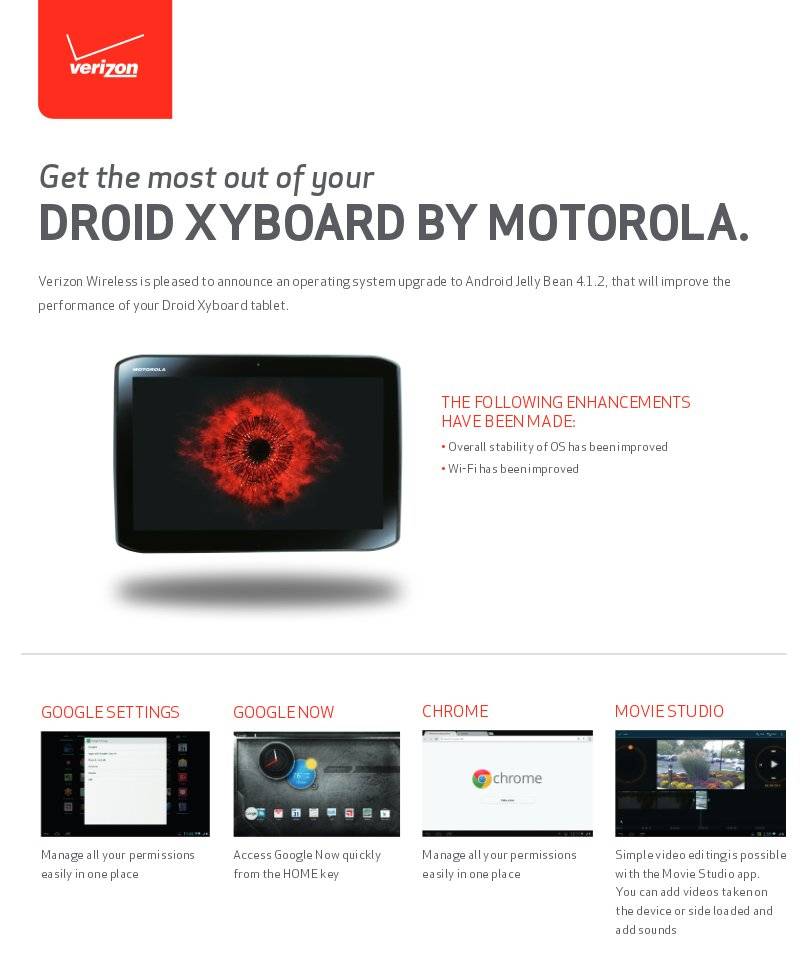 Owners of Motorola‘s early attempts at the Android tablet market have reason to rejoice. Verizon has pushed out an update that finally brings both 8.2 and 10.1 models of the Motorola DROID XYBOARD into the modern age with Android 4.1 Jelly Bean.

The Motorola DROID XYBOARD tablets launched at a rather interesting, if not unstable, time in Android history. It launched with Android 3.0 Honeycomb, which some have felt to have been a rushed job, right when Android 4.0 Ice Cream Sandwich was around the corner. The tablets themselves were nothing stellar, but, even by today’s standards, they are quite decent, with both models sporting 1.2 GHz dual-core processors, 1 GB of RAM, 16 GB of internal storage, and 1280×720 resolution displays.

Right when Android 4.4 came out, Motorola announced which devices will be receiving the latest Android version. Quite surprisingly, the manufacturer also revealed that the DROID XYBOARDS will be updated to Android 4.1.2. Not exactly the latest but definitely a welcome one. Now Verizon is finally rolling out that update and owners of the device will soon be able to enjoy features such as Google Now, the Chrome web browser, and the Movie Studio app.

Aside from the obvious Android version boost, the update also promises to bring an overall OS stability as well improvements to the tablet’s WiFi performance. The update, which comes via OTA, has just started rolling out and might take a while to reach everyone.