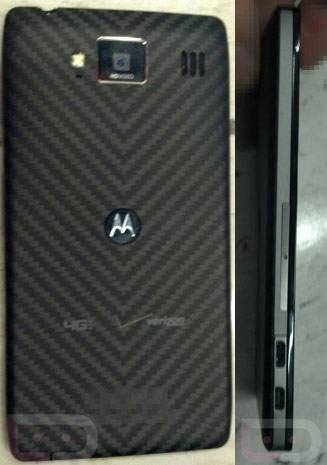 What do we have here? The Motorola DROID Fighter? If recent names and leaks are accurate this is the brand new Motorola DROID RAZR HD headed to Verizon Wireless this summer. Obviously sporting Verizon and 4G LTE logos on the back, we also get a look of that shiny all Kevlar rear casing to protect the smartphone. It’s the DROID RAZR, only better. More details after the cut.

Motorola’s brand new DROID RAZR HD is looking pretty sleek. Especially considering the tipsters details provided to Droid-Life confirms the phone will in fact come with a huge 3,300 mAh battery – just like the RAZR MAXX. With what should be a 4.5-inch 720p HD screen (that the leakster says is amazing) the phone also appears to have one massive camera.

If this device is anything like the RAZR HD’s we’ve recently seen in China, it could very well come with a 13 megapixel camera on the rear, and even a 3 megapixel front facing camera for video chat and self portraits. Just like the Motorola Atrix 3 that leaked this morning, the RAZR HD will come with Android 4.0 Ice Cream Sandwich, and have no capacitive buttons in favor of on-screen navigation just like the Galaxy Nexus. It should be powered by the Qualcomm 1.5 GHz dual-core S4 processor and 1GB of RAM, but we could see 2GB like the recent Galaxy S III.

The back again, doesn’t appear to be removable and you won’t be able to access the battery if it’s anything like it’s older brother. Nicely Motorola moved the micro-USB and dock HDMI port to the bottom side again instead of up top like some devices. Until we get additional details on the all new RAZR HD we’ll just have to enjoy this leak. Stay tuned!