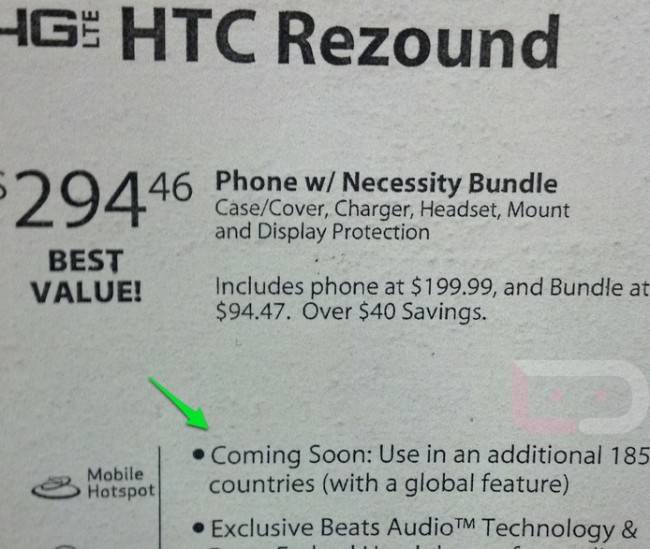 Verizon’s no stranger to global roaming, but thus far none of its 4G LTE devices have been graced with this feature. This, despite the fact that many users have been able to mod phones like the HTC Rezound for just that, and even enable rudimentary access to domestic GSM networks like AT&T and T-Mobile. Some candid photos of upcoming in-store materials show that Verizon is indeed planning to activate the latent GSM bands in the HTC Rezound, and probably other LTE phones, for international travel.

It works something like this: Verizon’s LTE network is in fact based on GSM technology, the same cell phone standard that most of the rest of the world (and half of the US Big Four) uses. At preset, the “old” EDGE and 3G portions of the LTE radios in some of Verizon’s phones are dormant, instead defaulting to the older CDMA standard for non-LTE data and voice calls. With me so far? There’s really no reason for Verizon not to enable global roaming on some or all of its LTE phones, aside from the fact that they perhaps haven’t readied the marketing yet. 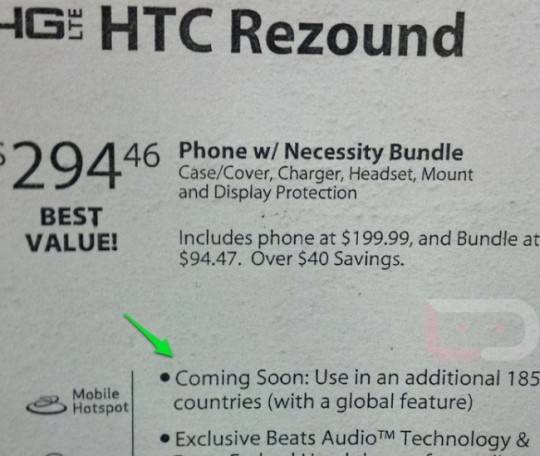 Phones tipped for the first round of global access are the DROID RAZR and DROID RAZR MAXX, DROID 4, LG Spectrum and HTC Rezound. Though global roaming is certainly a handy feature, as AT&T customers already know, it’s usually quite expensive. Even after signing up for an international plan, it may still be better just to grab a prepaid cell phone when traveling abroad, especially if you plan to do so for any extended period of time. We’ll have to wait and see what the rates are.