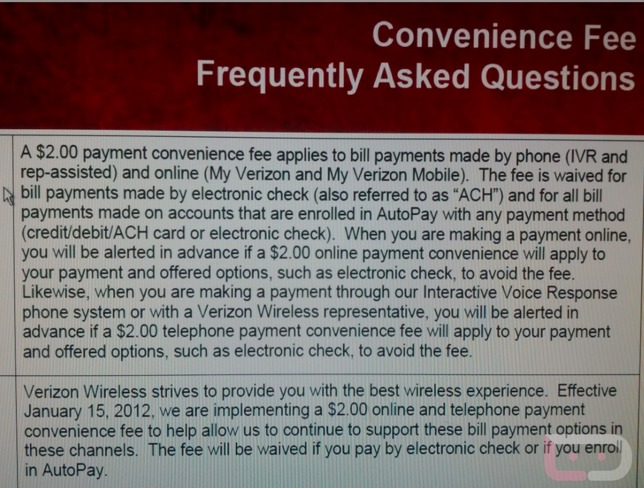 Big corporations try their best to make it easy on themselves to operate while still offering services at affordable prices to consumers – except Verizon. Sure, $2.00 isn’t much to tack on at the end of a bill, but it does add up when paying for Verizon’s ‘not-so-cheap’ 4G plans. And when consumers build their plans, they construct them to be as cost-efficient as possible. That’s why it’s hard to just let this one go.

There are a few ways to dodge this tiny bullet. The first, is to pull out that dusty checkbook and mail in your bill. The second, is sign up for Verizon’s ‘Auto Payment’ option to automatically withdraw funds through a monthly cycle. Then again, if your bank has their own automatic bill payment methods, that’s an option as well. Verizon Wireless gift cards are also not subject to the convenience fee.

I’ve been on many other carriers, and Verizon’s 4G LTE network has been the fastest by far – but that is expected when paying their steep prices. It’s not that you’re forking over another $24 a year to Big Red, it’s that your bill was already more expensive than the average cell phone company – and that’s when the nickels and dimes start to count. The $2.00 will not make me change carriers, but if their 4G LTE outage continues – that’s another story.