The official HTC One (M8) release details have yet to be announced, however the rumors and leaks continue to flow. As a reminder, HTC will be streaming the event on March 25th, and of course, we here at Android Community will have plenty of coverage. In the meantime, we are expecting the handset to arrive with a wide variety of carriers, and it looks like a leak has recently surfaced regarding Verizon Wireless.

Verizon, just like the other carriers, have yet to offer anything official. But coming by way of some HTC One (M8) promotional materials — it looks like Big Red will have some details ready at 1PM EST on March 25th. As you’ll see in the image sitting below, that promo box is telling everyone to “get ready to hit refresh” at 1PM EST on the 25th. That seems pretty close to what we heard from Carphone Warehouse in regards to UK availability. 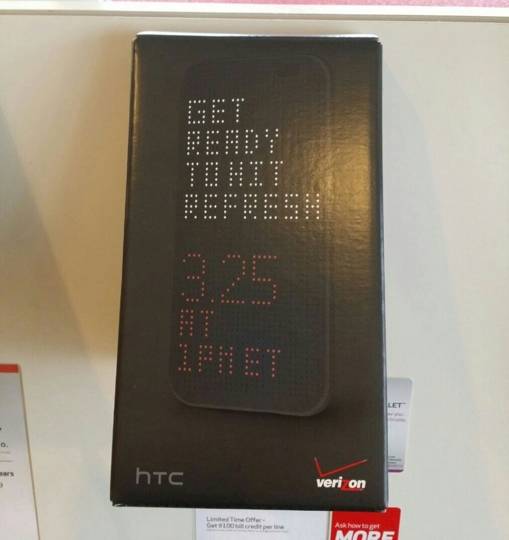 The catch with the Verizon piece though, we have yet to see anything direct from them. Not to mention, we aren’t entirely sure if hitting refresh will bring release details, a pre-order option, or regular availability. Obviously, we are hoping for the latter — Verizon simply having the HTC One (M8) available within minutes of the official announcement. That would also get the HTC One (M8) out ahead of the Galaxy S5.

Speaking of the Galaxy S5, while we have begun hearing from other US carriers, Verizon has yet to release any official details. The other carriers have all been pointing towards an early to mid April timeframe for Galaxy S5 availability. Anyway, all that having been said, this isn’t the first time we have seen leaks showing a Verizon branded HTC One (M8).