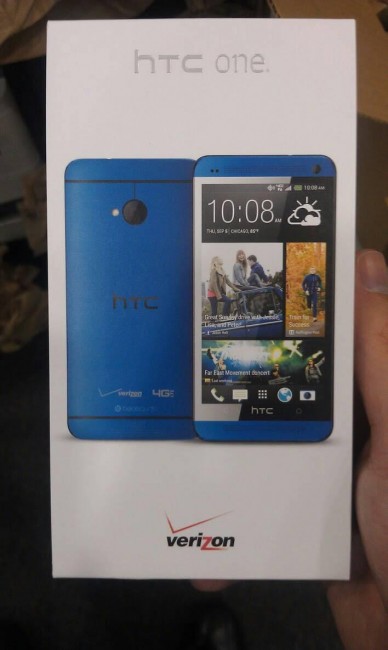 Well, here’s a little twist to the recent news surrounding the HTC One. After multiple tips mentioned a blue version of their beautiful anodized aluminum smartphone was coming soon to Verizon, the company announced the “Vivid Blue” model this week. However, we quickly learned it would be a Carphone Warehouse exclusive. Now though, pics of the blue model for Verizon have surfaced in a few Best Buy shops.

There’s nothing really new here. What we have is a Vivid Blue version of the readily available and impressive HTC One smartphone, only for Verizon. Initial rumors suggested they’d get one, but their months delayed launch date offered the smartphone only in silver. Not even the black option other carriers were enjoying.

Then we heard Sprint would get the exclusive on the blue model, just like the did with the red color, but that all ended up false. I’ve had enough of all these darn exclusives, but this appears to be no different. According to Droid-Life the Blue HTC One on Verizon will only be available from Best Buy, but that’s not too big of a concern.

If you love the beautiful blue color you see above, most likely you’ll be able to wander into a nearby Best Buy location sometime extremely soon and take one home. Then enjoy that fancy blue aluminum smartphone with blazing fast Verizon 4G LTE speeds. At this point, I just want a Nexus 5 with Verizon. Carry on folks!