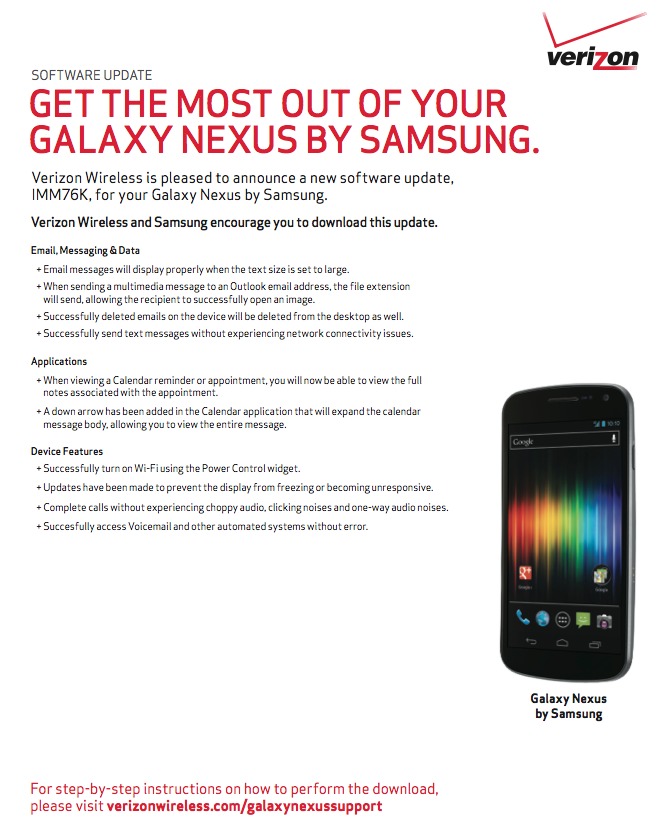 Would you look at that! Verizon and Samsung are finally ready to actually and officially roll out the update to Android 4.0.4 Ice Cream Sandwich for the Galaxy Nexus. After originally pushing the update and then quickly canceling, a few leaks and more Verizon is finally ready to give it the green light.

Verizon finally posted up the Galaxy Nexus IMM76K Android 4.0.4 Ice Cream Sandwich support documents over at the official Verizon Support Page. Explaining all the details and improvements that come along with the update. Whenever the support page finally goes live from Verizon the update is close behind. This is probably the same update that surfaced again last week now that its official and ready to go.

You can manually update your Gnex right now using the link posted directly above, or you can wait a day or so as the update should start arriving on handsets from Verizon any day now that they’ve approved it and listed it on their support page. According to their documents along with the usual 4.0.4 fixes Verizon and Samsung have fixed some text and email bugs, some multimedia message problems, and even improved call audio too. Verizon briefly mentioned data connection but that is about all.

It’s about time Verizon finally pushes this update. Nexus devices are supposed to be first in line to receive such updates and the international Galaxy Nexus received 4.0.4 a long time ago, but that is a discussion for another time. Start checking for updates and let us know once you get it.