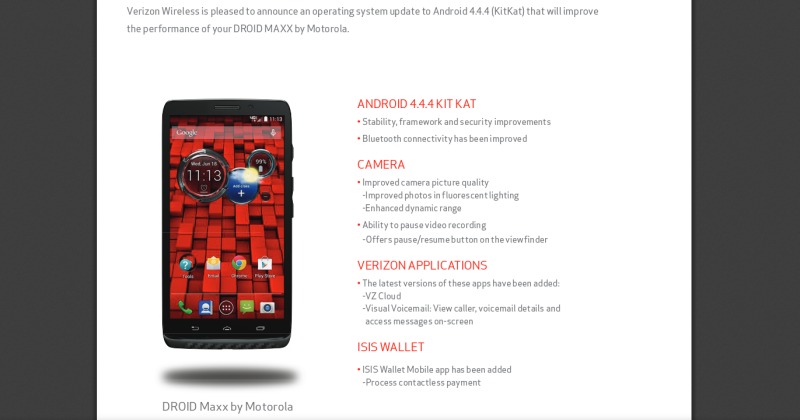 After a few months of speculation about Android updates for this trio of DROID smartphones, Motorola and Verizon have started rolling out the update with a bit of a twist. The firmware update bumps the Android version directly to 4.4.4, making these smartphones one of the earliest OEM handsets to get the surprise maintenance release. Not bad for 2013 models.

It should be noted that last January, Verizon released the Android 4.4 KitKat update for these three. Shortly afterwards, there was talk of further updates to 4.4.2 and then 4.4.3, but now it seems that Verizon skipped over those and jumped directly to the latest. Although Android 4.4.4 itself is a bit lacking in new features, Verizon took the opportunity to add some of its own flavor into the update. This practically means changes to or the addition of bloatware on the device. In particular, Verizon’s VZ Cloud and Visual Voicemail have been updated and ISIS Mobile Payment has been added, though the latter will probably be renamed as reported earlier.

Motorola is also giving it’s own side to the update. Since this 4.4.4 update also covers 4.4.3, we’re seeing some of the new features that made their way to Motorola’s other smartphones recently. This includes improvements to the Camera app, which not only has improved quality and consistent exposure but can now also pause and resume video recording right through the camera app’s viewfinder. The update also ropes in Motorola Alert, the manufacturer’s new emergency notification service that it launched last May.

This firmware update rolls out via OTA like any other, though Verizon claims that it will take only 3-5 minutes to download it, depending on the network connection. Of course, it also means that not everyone will receive the update at the same time, but you always have the option of either waiting for the OTA notification to arrive or manually checking for the update yourself.