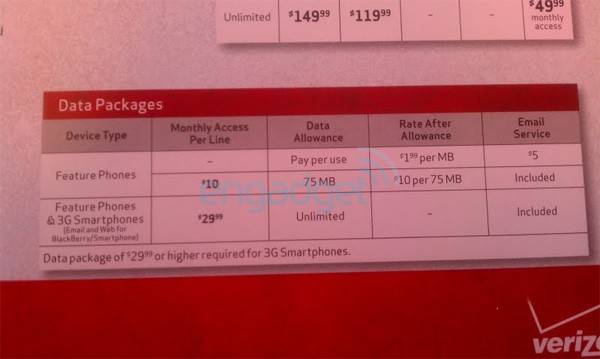 It appears that Verizon is getting ramped up for the oncoming slaughter of data usage soon to be very much commonplace amongst its Android (and iOS) users, first with a complete deletion of it’s 150MB/$15/mo data plan, then with a note that the $29.99 Unlimited Data plan having an extra note of “3G Smartphones” in addition to its Feature Phones Device Type. This is of course to note that their upcoming 4G LTC devices such as the HTC ThunderBolt will be costing something altogether different for such a freedom.

Other tiny tweaks can be seen here in this leaked image, but the most interesting point is of course the 3G/$30 unlimited marking point. What do you think an unlimited amount of data per month will be when their wave of 4G LTE devices are announced next month at Mobile World Congress 2011 then released soon after? $40? $50?

*NOTE: We’ll be live at Mobile World Congress 2011 to bring you all the news on these new LTE phones through the week. Barcelona bound!