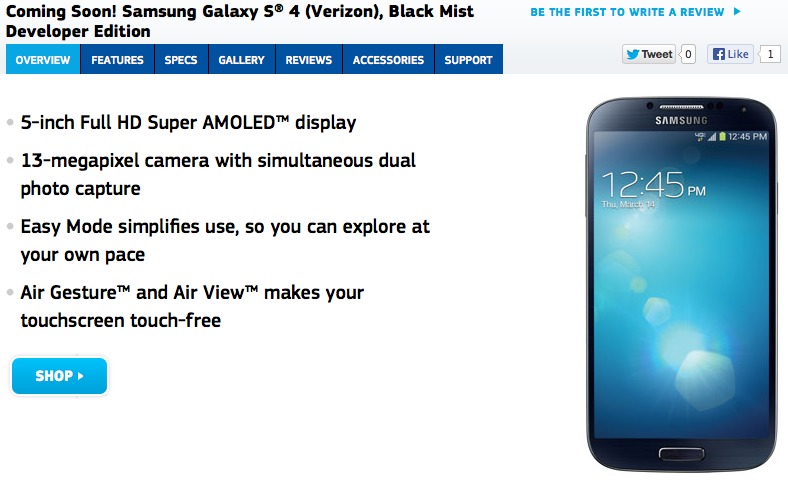 Today Samsung’s GALAXY S 4 flagship smartphone was finally released for Verizon Wireless, about a month later than the rest of the US carriers, and now we’ve learned they’ll also get a developer friendly model. If you were like us, and sad when the GALAXY S 4 ‘Google Edition’ was only announced for AT&T and T-Mobile, this news should make you happy.

We’ve just learned that Samsung will be offering up Developer Edition versions of the GALAXY S 4 for both Verizon and AT&T, at least according to some new pages up on Samsung’s website. These will be completely unlocked developer friendly devices, and we’re just glad to see Verizon will be included here.

As a reminder, these won’t be “Google Edition” devices like the one announced at Google IO, they won’t run stock Android. Instead these will be completely unlocked (bootloader too) and ready to hack so developers can get to work for the device. So far they are only showing the 16GB model, without a price, and it’s listed as coming soon.

The Google Edition GS4 will be $649 on the Play Store in late June, and we have a feeling around the same time frame is when Samsung will start offering these developer models online. If I were a betting man (and I live in Vegas) I’d say these will probably cost the same $649 from Samsung themselves.

As a reminder, the bootloader has been cracked on the regular retail version, but this is another option for those interested in taking the honest route from the manufacturer and carrier alike. Who’s buying?