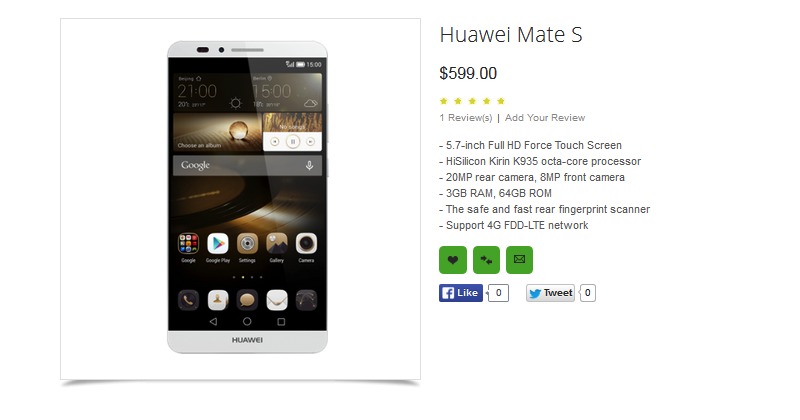 Aside from the new Huawei Watch and the Huawei Nexus phone, we’re also anticipating for the Huawei Mate S to be unveiled at the IFA in Berlin on September 2. Even before the official announcement, the phone has been spotted online at the Oppomart store with a $599 price tag. Nothing really official yet until the formal announcement but there are some details listed on the page.

The phone also features a fingerprint scanner on the back and 4G LTE connectivity. They say it’s a bit heavy at 185 grams but it still looks slick at only 7.9mm thick. What’s more interesting about the listing is that there’s also a mention of Force Touch. It’s the same display technology that is believed to be used on the upcoming iPhone 6S and 6S Plus from Apple. It allows the screen to differentiate a light tap from a heavy tap–so it can perform a number of functions.

If this will be unveiled on September 2, then it’s one weak ahead of the new iPhones will be announced on September 9. Let’s see who will show us what Force Touch technology is all about better.