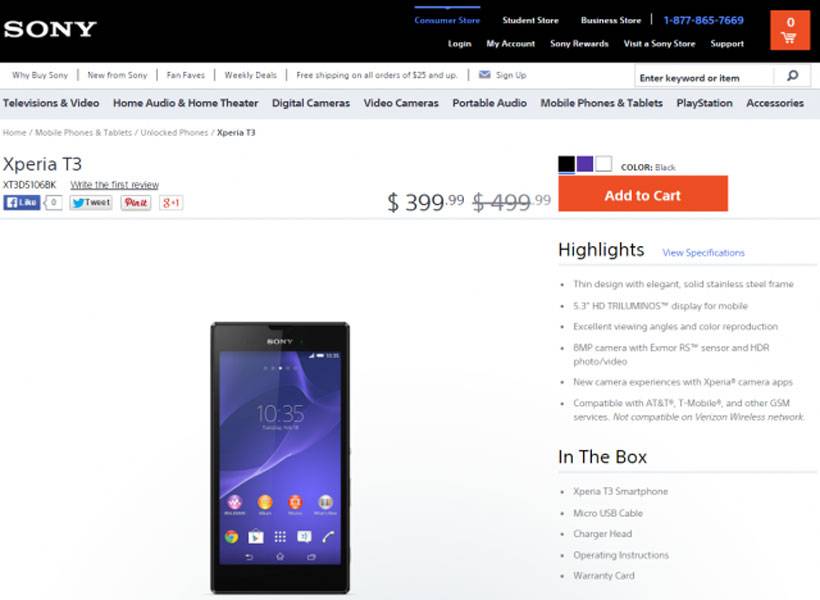 Fans of Sony Xperia smartphone have a new device that they can pick up in the US. The new smartphone is an unlocked version of the Xperia T3 that launched this summer and it is available to order directly from the Sony Store. The version offered in the US is model D5106 and it supports LTE bands 4,7,17.

That means the device will support AT&T and T-Mobile networks. Sony offers the T3 in three colors including black, purple, and white. The T3, as the price suggests, is a mid-range device that isn’t packed with the latest and greatest hardware.

The smartphone has a 5.3-inch screen supporting 720p resolution. The processor is a 1.4GHz quad-core Snapdragon unit and it has 1GB of RAM. Internal storage is 8GB with a microSD card slot for expansion. Sony fits the T3 with an 8MP rear camera and a 1.1MP front camera.

The big feature of this device is that it sells unlocked for $399.99. That’s not all that much more than some smartphones will cost you on contract. Sony is also now selling the Xperia M2 D2306 LTE smartphone for $279.99 supporting the same LTE networks as the T3.