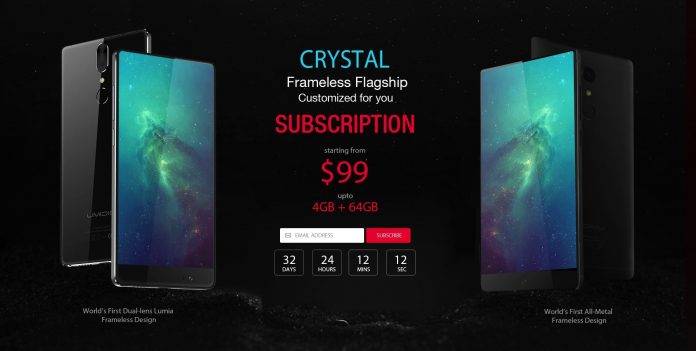 Phone makers of today are not only working to improve the imaging technology in their devices. OEMs, especially those based in China, are also busy designing phones with much bigger displays. We’ve seen Samsung Galaxy S8’s Infinity Display and the LG G6’s FullVision Screen. Similar ones are expected to be unveiled by other companies that are close enough to being bezel-less.

There may be a number of challenges but there is one group that dares to introduce an all-screen device. You may not believe it but UMIDIGI (formerly known as UMI) has announced this Crystal phone that is very affordable at only $99.

For a sub $100 phone, this best competes with the Xiaomi Mi Mix. We haven’t seen the actual phone but the product image shows off an impressive edge-to-edge screen. The all-screen display is obviously on the front only. It looks frameless for a bigger screen real estate. This way, you can view and do more on the phone.

The affordable price is one selling factor but the UMIDIGI Crystal’s screen is just beautiful. The specs may not be high-end but they are good enough for basic smartphone use. You can use the phone for calls, SMS, gaming, and quick access to your favorite social media apps. Specs listed include a 5.5-inch full-HD AMOLED screen, MTK Helio P25 chipset, 4GB RAM, and a 64GB onboard storage.

UMIDIGI Crystal follows last year’s UMi Z phone and directly rivals the Xiaomi Mi Mix which also boasts of being frameless. Two versions will be available: the basic Crystal phone and the Lumia edition. The Crystal Lumia is the pro version with its all-metal unibody build. The all-screen display definitely makes this model more attractive than ever.

The UMIDIGI Crystal will be ready starting June 15. You can pre-order for the device for only $99. Selling price may be different once released in the market so placing an order now can be a good deal. We’re not sure though if the price of the Lumia edition will be more expensive.