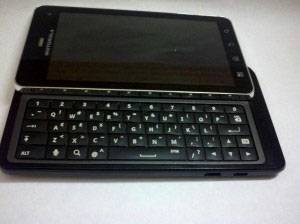 Here in the US we get the Droid line of smartphones, but over in the UK Motorola offered the same phone as the Milestone. Android fans of the Droid in the US and other places will be able to get the Droid 3 smartphone that turned up in the leaked how-to videos earlier this month at some point. If you are a UK fans of the milestone line that was hoping to see the Milestone 3 as it would be called in your neck of the woods bad news has landed.

It seems that the Milestone 3 will not be coming to the UK. Why exactly it’s not going to be offered is unknown and Motorola could always change its mind and toss the handset out anyway. There is no official reason offered for the device not making it across the pond. There is a chance that the Milestone 2 just didn’t sell well enough for Motorola to bother with a UK launch for the third version. As Clove points out the HTC Desire Z was also discontinued this week.

It may be that Android fans in the UK just don’t like the slider form factor. If you are in the States, we know some of the details on the Droid 3 already so fans in the UK know what they won’t be getting. The Droid 3 is said to pack in a dual-core processor, 4-inch qHD screen, and a 8MP camera with 1080p support. It also has HDMI out and a USB port.