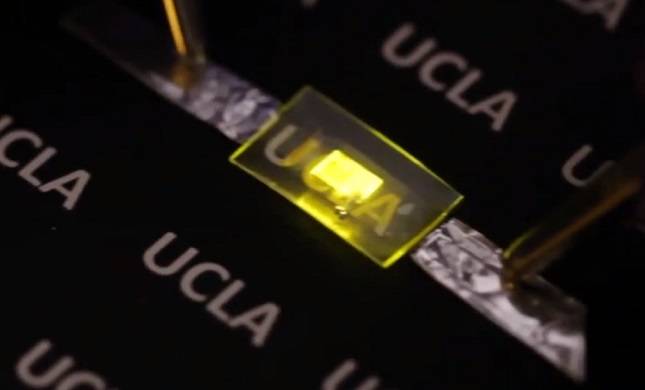 Lately we’ve been talking quite a bit about flexible and unbreakable displays in our smartphones, but everything we’ve seen thus far have only been prototypes. Samsung looks to change all that and have confirmed we’ll see their first (of many) flexible AMOLED display device next month in Korea. LG is also in the mix, but more interesting is the work being done at UCLA on the technology.

According to reports UCLA (University of California, Los Angeles) has a research team that has put tons of effort and focus behind this type of technology. Not just for smartphones and tablets, but for the wide array of wearable technology and screens the consumer electronics market thinks we’ll all be wearing soon.

UCLA researchers have developed an OLED display that is flexible beyond anything we’ve been shown by Samsung. Claiming their methods have been successful in building a screen that can stretch to nearly double its original size, flex completely in half, and do so well over thousands of times with no ill-effects. It’s extremely durable even after being bent, twisted, stretched, dropped and more. Crazy right?

As you’ll notice they are demoing a very small display, less than an inch in size, and certainly not something with a full array of colors. What we’ve seen from Samsung is far more advanced, not to mention expected to be in a limited edition Galaxy Note with a 5.68-inch display. While we can’t confirm how big Samsung’s device will be, it’ll likely be in a smartphone, which is far more impressive than this little guy from UCLA.

One important part of UCLA’s study though is that this screen is transparent when not in use. Meaning it could be completely invisible as a wearable display, and then come to life and color once needed. I want an invisible smartwatch that lights up and is noticeable only when needed, that would be cool.

This is still the early stages of wearable and bendable displays, and surely we’ll be seeing a lot more progress in the months ahead.