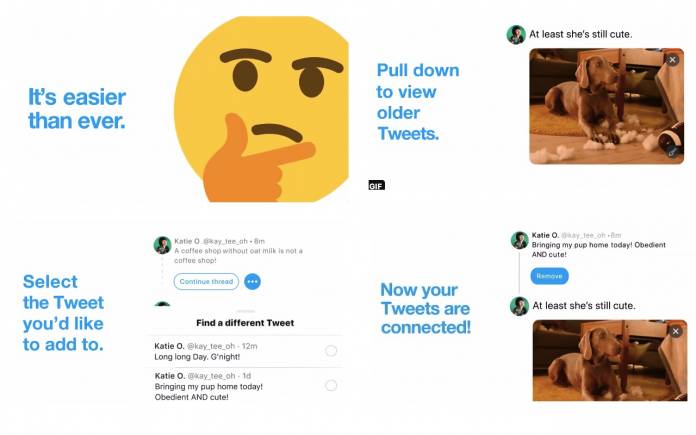 Facebook may have launched two years ahead of Twitter but we remember spending a lot of time on the microblogging site first in 2007. Back then, Twitter was simple. You follow friends and celebrities and the wait for their tweets. You can reply to them after their quick updates but limited to 160 characters only. The site has since evolved with several updates and enhancements like Fullscreen Maps, Push Notifications for Android, a UI closer to desktop experience, and Instagram-like filters and cropping.

The last update we shared with you was the emoji reaction in Direct Messages after the “Hide Replies” feature and improved 2FA for everyone. Twitter may have been reporting several bugs and abuses recently but the devs behind it continue to work on improvements. The latest official enhancement is a ‘Continue thread’ option that lets you ‘add a Tweet to one you already Tweeted’.

The option makes connecting new and old tweets faster than ever. It’s also easier to do. Just type a new tweet, pull down to find an old tweet, choose tweet you want to add, and they’re now connected.

Twitter may not be as popular as before but it’s not going anytime soon. Personally, I’m back to this old favorite because I feel Facebook it’s too public for me now. Twitter seems to be more laidback, allowing me to rant “quietly”.