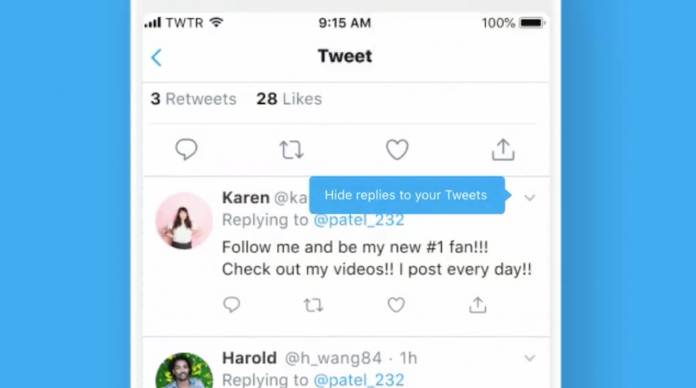 The controversial feature that Twitter rolled out to selected territories is now available for everyone. The “Hide Replies” option lets users take back the control of the conversations that they have on the platform but has also received criticism for hiding legit feedback and possibly creating an echo chamber of sorts. But in any case, you will now be able to experience how it is to be able to hide those replies that are just trolling you or causing you distress. Also, you will now be able to create two-factor authentication even if you don’t want to use a phone number.

The “Hide Replies” feature is one of the biggest changes that Twitter is bringing to all of its users. It works the way it sounds as you will be able to hide those replies to your original tweet that you find to be irrelevant, offensive, or spam. The tweet will not actually be deleted but users who are observing the conversation around your tweet will have to do another tap or click to be able to see that hidden tweet.

Starting today, you can now hide replies to your Tweets. Out of sight, out of mind. pic.twitter.com/0Cfe4NMVPj

One difference from its initial rollout last July in Canada and then the US and Japan just last September is that you will now have the option to block the replier if it’s already come to that point. Some have used the Hide Replies as a tamer and not so permanent way of dealing with annoying and sometimes outright hostile replies to your tweet. There have been some concerns that the hidden tweet icon remains visible and the notification that there are hidden tweets is too big but for now, there doesn’t seem to be any solution to that yet.

If you use two-factor authentication for several of your apps, you’ll be glad to know that you can securely authenticate your login process through the WebAuthn protocol. Previously, they used the FIDO U2F standard but it had its limitations. Now the new FIDO WebAuthn protocol adds more browsers and authenticators so you can be more secure. They will now only support physical security key authenticators, but they’ll add more options in the future.

We want to give you the most secure experience on Twitter. Today, we updated our login process to support WebAuthn for an enhanced Two-Factor Authentication (2FA), so you can easily and securely authenticate your login with a single tap. Read more below.https://t.co/yduXz7OBjY

For now, update your Twitter to the latest version so you can “enjoy” having the hide replies feature. They will soon launch a “new hide replies endpoint” in their API so developers can eventually add more conversation management tools.