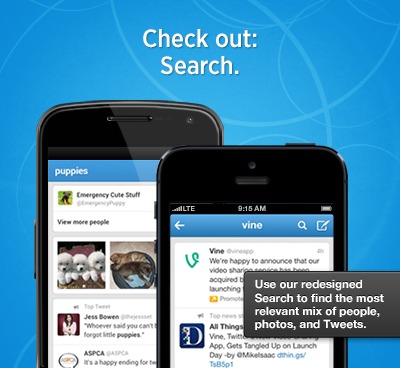 For all those Tweeters out there that opt to use the stock Twitter client on Android, we have good news regarding their latest app update. Today the folks from Twitter’s developer team have released details on their new and improved search and discover tools. They’ve combined tons of tools to make discovery even easier and much more so read on for all the details.

Carbon Twitter app was just updated, but this is all about the official Twitter app so lets take a look. Out of the gate the entire Discovery tab has been redesigned and combined everything into one easy to see and discover place. Now things like suggestions, tweets, activity and even trends all flow into one easy to read and enjoy stream. This should really make things easier and faster for all users on Android and iOS.

Search has also been widely improved. Now when a user searches for something Twitter will not just return results, it will return the most relevant mix of tweets, accounts, photos and more — instead of just a wall of results to dig through. It’s as if someone at Twitter finally learned that making this all streamlined would be better for the users. Something we’ve known for quite some time.

Links, you can’t forget links. Since Twitter is such a social site full of news and links being delivered by the millisecond they’ve finally improved that aspect. Instead of having to tap once to expand a tweet and again to click the link, if you directly tap the link it instantly opens. That one was a no brainer and we’re glad to see it finally arrive for their mobile app. The Play Store listing also mentioned improved support for Arabic, Farsi and Hebrew. As well as miscellaneous bug fixes and performance improvements. Get it now!