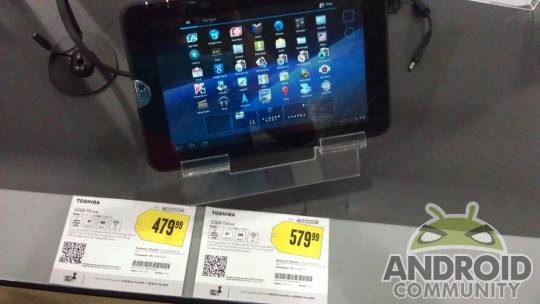 Earlier this month the Toshiba Thrive tablet landed for fans of the Honeycomb device to grab up at Newegg, Best Buy and several other retailers. Things seemed fine with the tablet at the start and now there is a bunch of users having a bothersome issue with the tablet. Over on the Toshiba Forums there are multiple pages of users reporting that the tablet won’t wake from sleep mode and that a reboot is required.

The first user to report the problem says that when the tablet is in standby mode and the button is pushed to wake the tablet nothing happens. The tablet requires a reboot to get it to come on. A fix having to do with a battery swap is reported by one user to bring the tablet out of sleep mode, but the same user reports that he can’t login after that and still has to reboot. Several other users have also reported that the battery removal work around doesn’t fix the issue.

Another user also reports that factory reset doesn’t fix the issue either. The issue seems to be happening on all versions of the Thrive. Toshiba is gathering information from the users that are having the issue and says that it is working on the problem. Are any of you using the Thrive having this same issue?