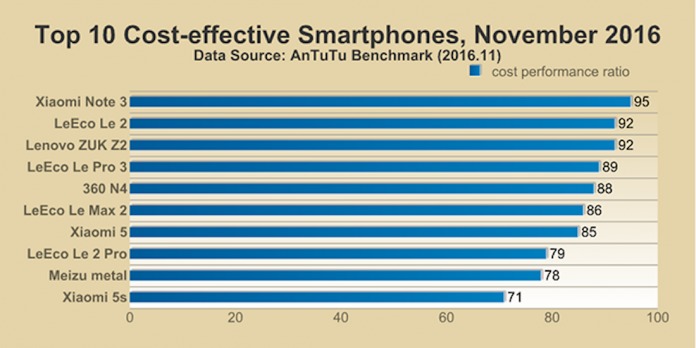 What’s the most cost-effective smartphone today? We can list a few models but some people will probably question the basis for such judgment. Good thing though we have groups to trust so figures and data are somewhat believable. After releasing the ‘Top 10 Performance Android Smartphones for November 2016‘ last week, AnTuTu has reported the ‘ Top 10 Cost-effective Smartphones’ for the same month. The goal aims to inform the mobile industry and the consumers of the best-value device that can be worth your money.

To get the statistics, AnTuTu computed the cost performance ratio by getting the average Antutu score of each model/current market price. Data were gathered from November 1 until November 30 from at least 2,000 average score samples for a single model.

AnTuTu noted that there was a significant change in numbers because of price fluctuations. The number may not matter to ordinary mobile consumers but it’s interesting to see which phones are considered the best value. For the previous month, ranking first is the Xiaomi Redmi Note 3. It became No. 1 with 95 as cost performance ratio.

The Xiaomi Note 3 is followed by the LeEco Le 2, Lenovo ZUK Z2, LeEco Le Pro 3, and 360 N4 completing the first five rankings. Trailing behind are the following: LeEco Le Max 2, Xiaomi 5, LeEco Le 2 Pro, Meizu metal, and Xiaomi 5S. Notice how all phones are from Chinese OEMs. Obviously, they are the more affordable Android phones.

This list is expected to change for this month but we’re willing to bet it will still consist of phones from Chinese OEMs.