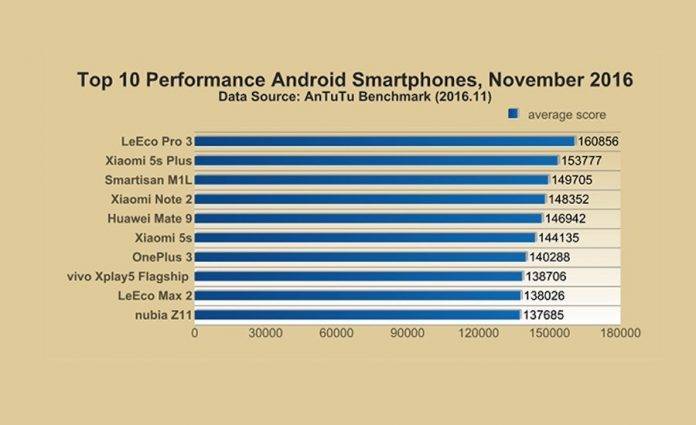 The fourth quarter(Q4) isn’t over yet but this time of the year, top brands and companies are expected to release their “Best” and “Most” Lists. We’ve already seen the best Android apps listed on the Google Play Store recently. Google will still publish more lists and awards but we’re most curious what phones are the most popular this 2016. We have our own guesses but benchmark groups like AnTuTu are the best sources for such information simply because they have the tools and methodology to gather and identify the figures.

AnTuTu doesn’t have complete data yet for this year so let’s just look at the November report. Listed above are the ’Top 10 Best Performance Smartphones’ for November 2016. These aren’t just random phones and numbers. AnTuTu took the average score of each model that accessed their tool within the period of November 1 until November 30. About 2,000 phones were checked as part of a sample.

On top of the list is the LeEco Pro 3 with an average score of 160856. Coming in second place is the Xiaomi 5S Plus followed by the Smartisan M1L, Xiaomi Note 2, and the Huawei Mate 9 completing the Top 5 Ranks. Trailing behind are the following: Xiaomi 5S, OnePlus 3, vivo Xplay 5, LeEco Max 2, and Nubia Z11. Most of these devices are noticeable from Chinese OEMs.

Checking both iOS and Android platforms, the results are different but most of them are still part of the list. The Top 2 Performance Smartphones last November were the iPhone 7 Plus and the iPhone 7. Ranking 3rd until the 10th place are the remaining Android phones we mentioned earlier. For obvious reasons, the last two–LeEco Max 2 and Nubia Z11–we dropped from the list.