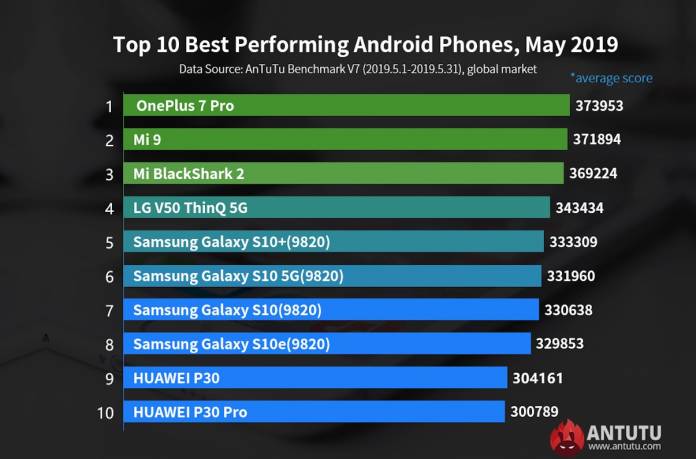 AnTuTu isn’t just a benchmark for upcoming smartphones in China. The website looks into different phones from all over the world in a given period of time. The last related report we featured here was last year when we shared with you the Top 10 Best Performing Android Phones for November 2018. The first half of 2019 is over and we’re ready to know what devices have thrived and entered the scene with little or much success. AnTuTu has just released the May 2019 report for the Global Top 10 Best Performing Android Phones.

A newcomer has entered the scene in the form of the OnePlus 7 series. There are actually two: the regular OnePlus 7 and the OnePlus 7 Pro. Both phones run on Qualcomm Snapdragon 855 chipset, joining other premium flagship devices with the same processor.

Qualcomm SD 855-powered phones now outrank last year’s Snapdragon 845-powered devices. To check, AnTuTu has gathered all averaged scores. It’s not highest score per model because results may vary. The data were collected from May 1 to May 31, 2019. At least a thousand units per model were checked so you know the Antutu Benchmark V7 sample is large.

Number 1 right now is the OnePlus 7 Pro with a score of 373,953. It is followed by the Xiaomi Mi 9 on second place then another one from Xiaomi, the BlackShark 2. The LG V50 ThinQ 5G is fourth in ranking. Completing Top 5 is the Samsung Galaxy S10+.

We’re assuming the Samsung Galaxy S10 mentioned here are Snapdragon 855 as it is more powerful than the Exynos variant. The June 2010 list may change a bit because new phones are coming in. We’re curious if the upcoming foldable phones will be included in the near future. Let’s wait and see.