An update for The Weather Channel app arrived in the Google Play Store a short while back. That update brought the app up to version 4.0.1 which included numerous improvements such as faster maps, more detailed forecasts, a refresh button, optimization for tablets and more. The update also brought some improved focus on the in-app advertising. But before we get into that, it looks like Cameron Clayton, president of the Weather Company’s digital division has recently been talking about that update, and why it came now.

To put this bluntly, it appears as if the Android app update came as a result of the team realizing that Android is a popular platform. Let us clarify that statement though, Clayton, in speaking with Fierce Developer noted that “around the end of Q3 or the start of Q4, our Android app took over from our iPhone app in terms of active monthly users.” He went on to say that The Weather Channel app on Android now has more than 18 million active monthly users and that this “was a wake-up call” for them. They hadn’t expected the Android app to eclipse the iPhone app so soon.

So yes, Android is a popular platform and it has lots of users. Lets shift away from sounding like an Android fanboy and jump over into some of the reasoning behind this update. In particular, touching on the in-app advertising. Those who use the app will likely realize the overwhelming ads. For those not using The Weather Channel app, you can get a look in the screenshots below. Clayton has said that they needed to re-imagine how they did mobile advertising and “do it much better” going on to say that he is “very bullish on what we’ve accomplished.” 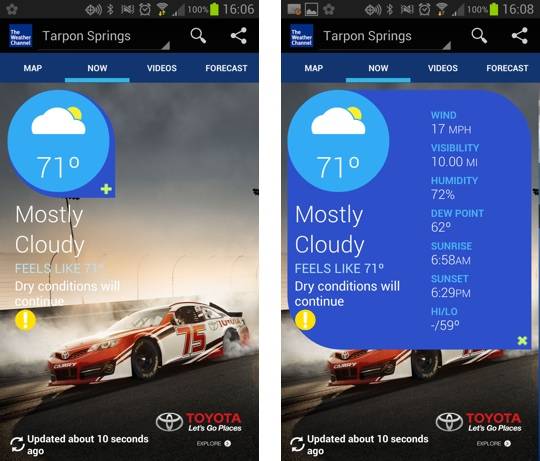 If you ask us, at times, the app has the appearance of being an advertisement first and a place to get weather second. Of course, to be fair, that is part of the design. In fact, the branded (advertising) backgrounds are all weather-triggered and all actively change in real time. In that respect, it is pretty neat. Still, we cannot help but wish these branded backgrounds could change to un-branded backgrounds if we were willing to pay a few bucks for the app.

Needless to say, you are not going to be able to make everyone happy and despite the complaints that I may have about the app, I still use the app because it provides accurate and up to date weather details including current conditions, an extended forecast, videos, a map, any emergency alerts and more. For those using The Weather Channel app, do you think this latest update was a step in the right direction design wise?